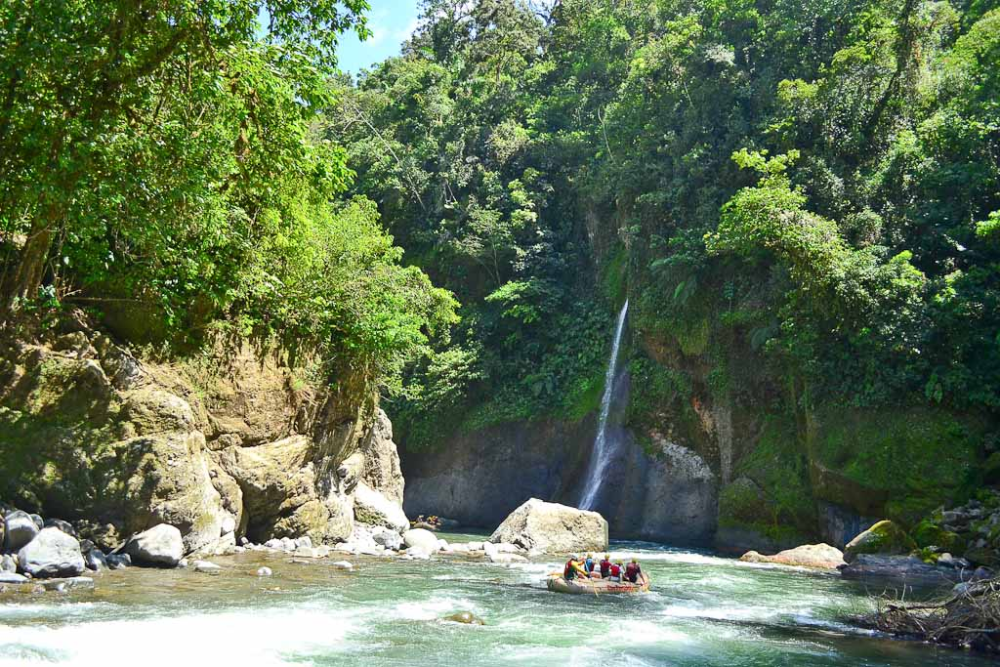 Whitewater Rafting on the Pacuare River

Whitewater Rafting on the Pacuare River

Against the rainforest flora, the Morpho butterfly's electric blue wings are almost dazzling enough to forget the raging waters churning underneath the inflatable raft. But then you're tossed into the air, clenching the paddle and hoping to land back on the boat rather than the nearby rapids.

Often considered among the best whitewater rafting experiences in the world, navigating the rapids of the Pacuare is an adventure and a unique glimpse into one of the world's most unique and mesmerizing habitats.

Flowing from the Talamanca mountain range into the Caribbean, the Pacuare River is 67 miles of class II, III and IV rapids that wind through valleys, gorges and mountains layered with dense, primary rainforest.

The Pacuare's waters are (at times) tranquil, lilting currents that carry rafters on a scenic tour through the surrounding forest where trees reach hundreds of feet into the air and ferns crawl up their massive trunks. Up around the river bends; however, the Pacuare can change into malevolent, frothing turbines of undulating water that pitch and buck rafters from side to side.

The rapids on the river vary in degree from class II with small, white tipped waves to class IV with bulky, irregular waves, large rocks and narrow passages that require skillful maneuvering and experienced guidance.

Rafting team sizes vary, but are generally made of 7 people: 6 paddlers work in unison to angle the raft over rocks, through channels, into and out of the river's current at the commands of a guide—who in our case was an expert with more than 20 years' experience. Often, a kayaker will trail a team of rafts, to help in case of emergencies.

After a day of building our trust and rapport, Chino (our team's expert) tricked us into flipping the raft, leaving the team to idly float through the Dos Montañas Gorge; a deep, narrow ravine where far overhead plants and moss grow along the cliffs and an abandoned bridge hangs perilously. Underneath, revelers—like us—float along in the emerald green water, swimming to the canyon walls where threads of waterfalls rain into the river below.

Most of the rafting along the Pacuare takes place along river's lower section, 23 miles of undisturbed first-generation rainforest. Wild banana and sour guava trees grow along the banks beside giant, wild cashew, sabe and Indiana desnudo (Naked Indian) trees, a few of the innumerable species cultivated in the nearby forest.

At times, the undergrowth and canopies are so opaque, they form a nearly impenetrable wall of vegetation surrounding and hanging above both sides of the river. Hidden within are some on the most exotic creatures on the planet; toucans, jaguars, anteaters, howler monkeys, iguanas and bushmaster snakes, to name a few. Common sights on the river include a variety of colorful and diverse butterflies, birds and frogs.

Paddling between rapids and placid waters, it's impossible not to encounter the wildlife. One of the members of our team nearly dove out of the boat when a small, cream-colored tree frog leapt out of the water onto his leg. The frog hitched a ride to a nearby waterfall where he jumped back into the river. Farther down, upon entering a valley, our team was previewed to a large flock of Montezuma's Orioles (large, dusky red-brown birds with bright yellow tail feathers) that flew over our heads into the nearby orange-blossom Poró trees.

Getting on the Raft

Rafting the Pacuare started more than 30 years ago and has grown to include a handful of companies that specialize in 1, 2 and 3-day tours on the river. All of the companies work to preserve the pristine habitat along the river, buying land to create protected areas, plucking trash from the river and ensuring that nothing is left behind on the journey. Exactly what eco-tourism is all about, rafting along the Pacuare River is eye-popping, exhilarating and environmentally friendly.

Whitewater Rafting on the Pacuare River in Pictures