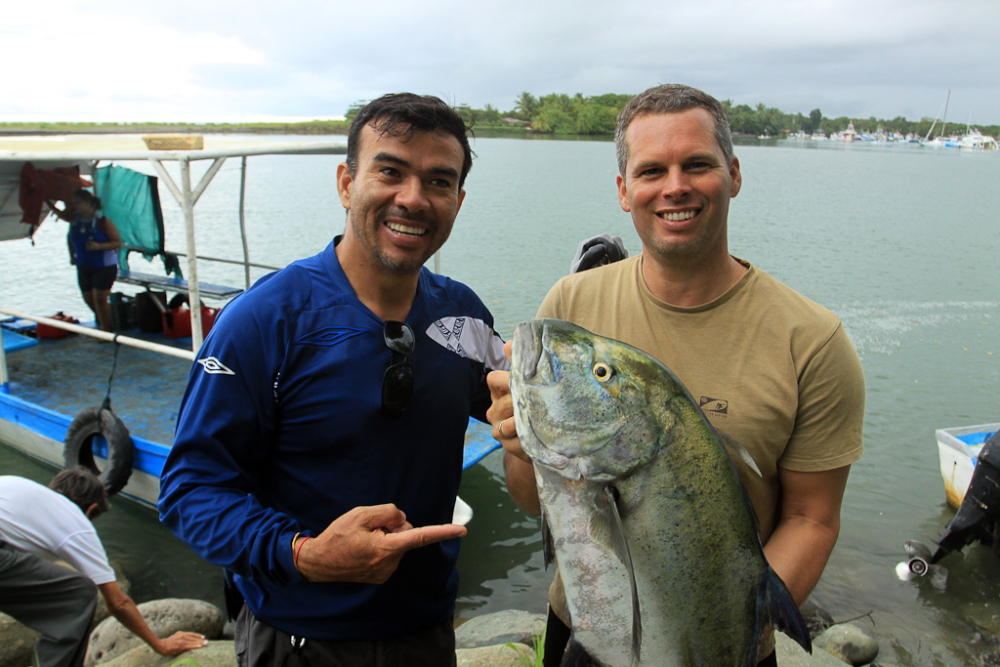 In-shore fishing off the coast of Manuel Antonio

Blog > Travel > In-shore fishing off the coast of Manuel Antonio

In-shore fishing off the coast of Manuel Antonio

Manuel Antonio is known for its world-class sport fishing, but you don't have to go far to drop your line. In-shore fishing is an often overlooked adventure in Manuel Antonio.

While you won't catch any marlin or sailfish, you'll be sure to catch something you can actually put on your dinner plate. The rocky shores of Manuel Antonio brim with sea life including several varieties of snapper, lobster, Spanish mackerel, barracuda, trigger, jack fish and a lot more.

For about $200 plus gas, you can rent a panga – an 18 to 20-foot Costa Rican skiff with an outdoor motor – and hire a local guide to cruise around the coastal waters. Locals know all the best spots, particularly the seamounts – underwater rock formations that make great habitats for fish.

I spent the day with local Scott Nieminen, owner of Hot Springs Lodge and, his friends Chris, a local spear fisherman, Morilio, a local naturalist guide and fisherman, and our driver, Santo Zapata, a Manuel Antonio native who has spent his life fishing in the area.

We rode out at about 7 a.m. with the sun rising over Cocal Island, we passed surfers catching the day's first tides. Farther out we passed a team of local commercial fishermen picking up nets with live lobsters.

Our first spot of the day was just off the coast of a rocky island maybe a half mile from shore. Morillio showed us the local way to set the lines; heavy weights tied to the end of the line with three hooks, each placed a foot above the last. Each of the hooks was then set with its own line (so that if it breaks, we wouldn't lose the whole rig).

Using calamari, shrimp and sardines as bait, we dropped our lines off the side of the boat and ran out the line until we felt the weight hit the bottom. Then we reeled up, just a half-turn to make the line taut.

The first catch of the day came only a few minutes later when Chris nabbed a 2lbs spotted red snapper. Soon, we all had bites and I caught my first fish, a tiny snapper I had the honor to let him go (but not before snapping a picture).

It wasn't until we moved to the next spot, that the fish really started biting.  A few hundred feet off the coast of another rocky island, we were catching fish in swarms. We merely dropped our lines in the water before pulling them back out with fish on the end. Spotted red snapper, gallina (Spanish for hen), margarita and trigger fish filled the cooler.

When Chris' pole snapped after fighting what must have been a big one, he took it as a sign to jump in the water; spear gun in hand.  Within minutes, he pulled out a 6lbs Spanish mackerel followed by an 8lbs red snapper; followed by a massive 15lbs. Barracuda. The biggest catch of the day though, was an18lbs blue Jack that Chris speared off the coast of another island in the archipelago near Espadilla Beach.

Sometime after midday, we called it quits and headed back to Quepos to unload our cooler, filled with fish. If we'd had the time, we'd have stopped by one of the local restaurants in Manuel Antonio where they'll fry up your catch for a small plating fee, but instead we headed to the Hot Springs Lodge where we cleaned, gutted, and whole fried a couple of red snapper for dinner.

In-shore fishing off the coast of Manuel Antonio in Pictures