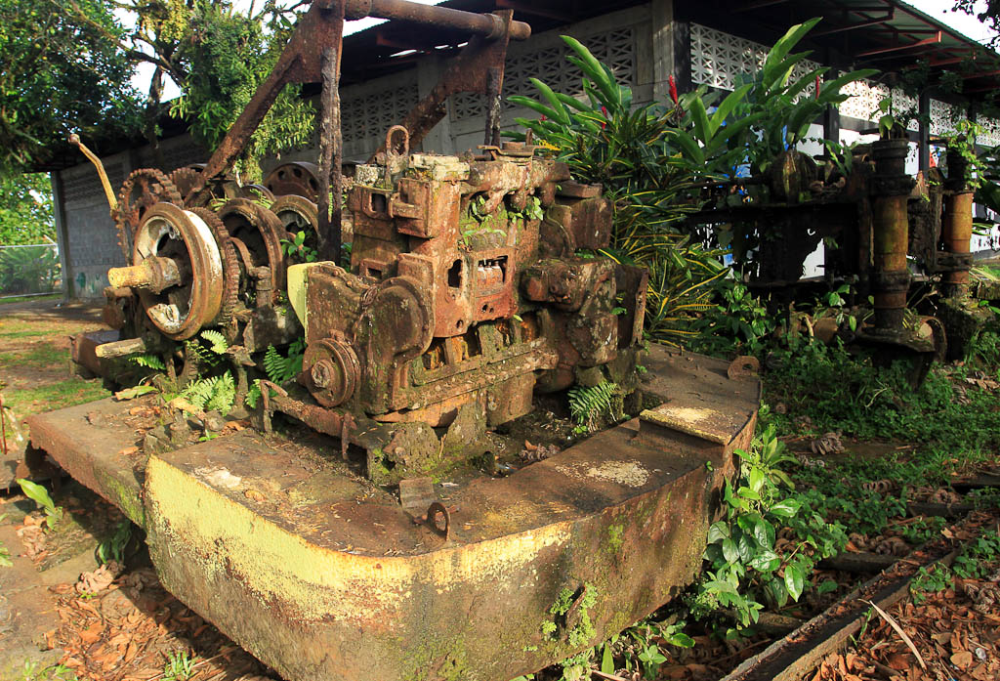 A trickle of red sap pools under the knuckle of a sangrio tree on the river's edge. More than 50 years ago, before the creation of the Tortuguero National Park, locals would come and gather this sap to use as a salve on cuts earned from working the land. For thousands of years, the local Indian tribes –closely related to the Mayans – used and passed down this knowledge from generation to generation.

The same salve was used in the 1950s to heal the wounds made while logging the great hard wood trees that reached toward the heavens only to be cut down at the hands of foreign-owned saw mills that saw more value in cutting lumber for housing developments than preserving these gargantuan trees.

The logging companies came to the coastal town of Tortuguero promising jobs and prosperity to the villagers.  In return, the logging companies cut down trees, carved out canals and floated the wood to sawmills where they could be cut and freighted around Costa Rica and abroad.

The logging companies weren't even the first to exploit Tortuguero's natural resources. Eighteenth-century Caribbean, European and Spanish merchants came looking for the thousands of sea turtles that nested upon the Tortuguero's beaches. The Hawksbill, loggerhead, leatherback and green sea turtles were caught and killed for their meat, oil and shells. By 1912, an 18-ton ship, known as the Vanguarda, began collecting thousands of green sea turtles along the coastline for shipment to Europe and the United States.

By the 1950s, Tortuguero reaped what it had sewed. The logging companies went bankrupt leaving their equipment behind, equipment that today still sits in Tortuguero's central square, overgrown with ferns, moss and layers of rust. The people of Tortuguero went back to farming coconuts, cassavas, yams and bananas, keeping a few pigs and chickens while hunting game and fishing.

It was Christoper Colombus who gave 'Costa Rica' its name, meaning 'rich coast', upon first landing along the nearby coast of Limon in 1502. What he described, as he rode into shore, were thousands of sea turtles that filled the waters off the coast "in such vast numbers that they covered the sea." But by the 1950s the turtles were in danger.

On the beach, men known as veladores would flip sea turtles as they came ashore to nest leaving them for poachers to catch in the morning. The turtle population, much like rainforest, was left in shambles. Other wildlife suffered as well. The manatees, great green macaws and jaguars that thrived for millennia were killed in turn for their meat, feathers and pelts.

One day an American zoologist named Dr. Archie Carr came to Tortuguero. Legend has it that while walking along the beach one morning Dr. Carr saw poachers taking the flipped turtles from the beach and he knew something had to be done.

But Tortuguero relied on the sea turtles. Locals sold the shells and meat to passing ships while restaurants served turtle meat soup that many like former-hunter Bill Sambola claim to be made with the best meat in the world.

Carr envisioned that tourism would offer the villagers a sustainable alternative to hunting the turtles knowing that if the people of Tortuguero could work together to conserve Tortuguero's natural resources, tourists from all over the world would visit the area creating jobs and prosperity for the whole village.

In 1956 Carr published a book, The Windward Road, that brought international attention to Tortuguero and its sea turtles. In response, Joshua B. Powers, a publisher, met Carr and together they founded an international organization known as the Caribbean Conservation Convention (CCC) for sea turtle protection, conservation and research in 1959.

More than 100,000 visitors come to Tortuguero every year to see the national park and watch the sea turtles nest on its shores. Archie Carr's turtle conservation program has tagged more than 35,000 sea turtles and watched the sea turtle population increase more than 500 percent since the program's inception, according to CCC member the Sea Turtle Conservancy in Tortuguero.

Tortuguero now has more than 1,500 residents. Most work in tourism as boat drivers, naturalist guides, hotel and restaurant owners and employees. Sambola gave up his life of hunting to work with Carr and today, at 86 years old, continues to work as a naturalist tour guide in Tortuguero National Park.

How conservation saved Tortuguero in Pictures