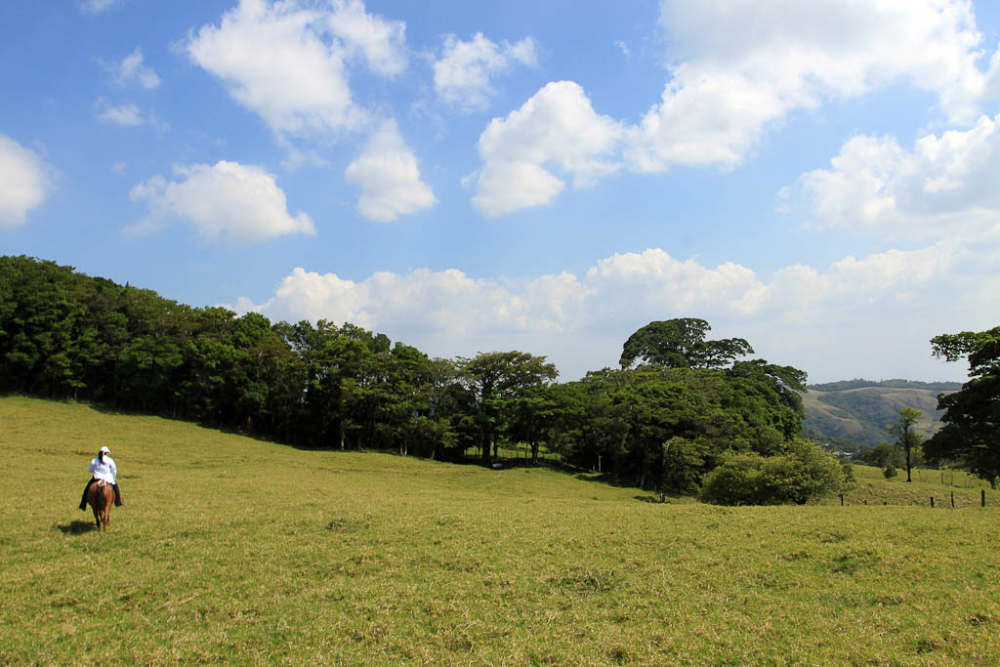 Life in the Monteverde Countryside

Life in the Monteverde Countryside

Roxana has loved animals since she was a girl growing up on one of Santa Elena's original farms. I sat with her sipping coffee in the hotel where her father's farm once stood as she pulled an orange scarf from a black shoulder bag. A tiny opossum awoke and yawned as she unfurled the scarf. Roxana explained how the 'baby' had been left behind by its mother near the doorstep of her house and she took it in. After spoon feeding it some banana, we got in her jeep and headed toward Heliconia Ranch. On the way, we stopped at the bakery to pick up some loaves of bread. Roxana, owner of a major Monteverde hotel and ranch, still makes time to run errands.

Driving through Monteverde countryside, time unwinds and life exists much as it has for the last seven decades. Farmers grow coffee along mountain slopes, milk cows and make cheese. In the small town of Cabeceras, visitors to Heliconia Ranch take part in the daily lives of Monteverde locals tasting the coffee, learning the traditions and seeing the ranch on horseback.

We arrived at the farm in time for me to join a small group for a coffee tour that had just started. The guide took us around the eleven-acre organic coffee farm and through the processing center where they washed and dried the beans.  Like most of the coffee producers in the region, the farm is part of the local co-op that works together for the production, cultivation and exportation of the coffee beans. After explaining the nuances of the roasting process, I had my third cup of coffee poured by Roxana now donning a chef's outfit and pouring coffee for all the guests.  Later, I learned from Roxana's son that this is the traditional Costa Rican way "You do something, then you have coffee."

While we sipped our coffee, a group of local dancers prepared a show. The ranch sponsors the dancers as part of a local music program.  The dances, usually performed at parties and festivals, showcase Costa Rican heritage; as do the girls' dresses, which are the colors of the Costa Rican flag (blue, white and red). The dresses have long flowing skirts for girls to grab between their hands making the skirts look like twirling flowers. During the last dance, the girls and boys grabbed the hands of all the visitors and dragged us into the center circle to join them.

Huge platters of food flowed from the kitchen as the dance ended. By now the small tour group had grown to some fifty people, all of us sitting around large wooden tables. Servers brought out giant trays of salad with tomatoes and sliced cheese, marinated beef and pork, bowls of rice and picadillos (diced squash). But the best part, were the fried plantains – Roxana's recipe – made with milk, butter, cinnamon and sugar.

After lunch, tour buses gathered up many of the visitors to head off to the Monteverde Cloud Forest Reserve while I stuck around for a tour of the ranch on horseback. We headed out up a dirt road, myself, Roxana's son Mario Andres, his cousin and couple of friends. Mario led us to the pastures as cows grazed beside the barn where they are milked every day at 3 and 11 a.m. The milk is sent off to another co-op, though some is used to make cheese.  As we rode past, Roxana caught up to us, having just finished cleaning up lunch from the day's guests.

We rode through the different pastures in-between gates and patches of forest. Roxana explained that the rainforest helps preserve the local water resources for the valley? She's currently encouraging her neighbors to follow her footsteps and begin their own reforestation projects on their properties. From the highest hill on the ranch, we looked out over into the Nicoya Gulf on the Pacific side of the country and down into the valley. Below, in the farming town of Cabeceras, I imagined farmers tending their animals, working in the coffee fields and sat down on their patios to enjoy the afternoon over a cup of coffee with neighbors; much as they’ve done for nearly the last century.

Life in the Monteverde Countryside in Pictures