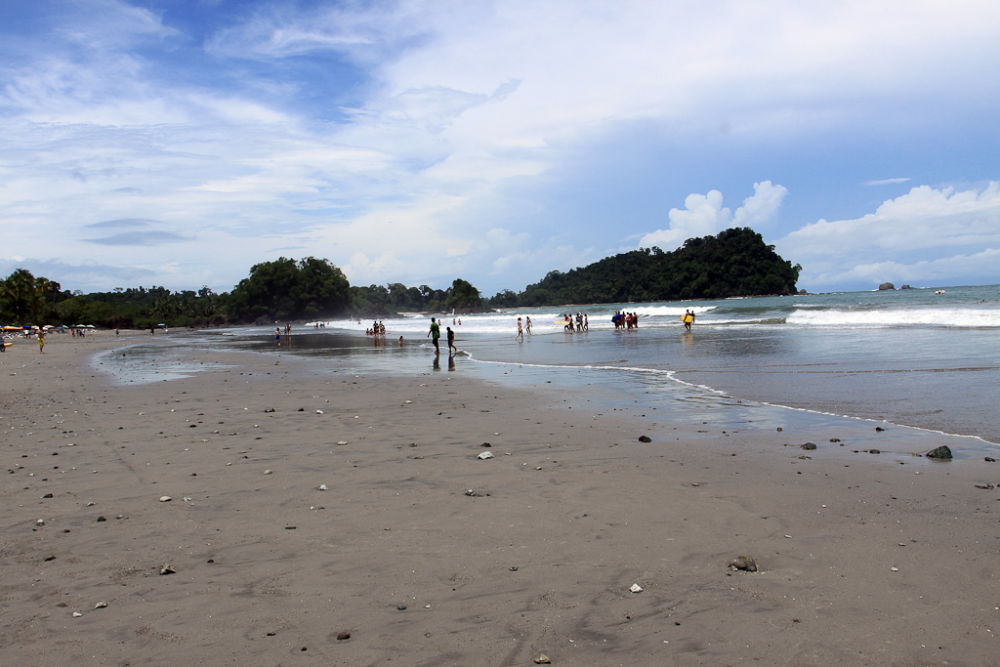 It's hard to believe you're sitting 600 feet in the air. Only moments ago you were standing on the beach, with a deflated parachute spread out across the sand behind you. Now you're in the air. The transition was something like walking up an invisible escalator. One second you're walking on the beach, the next you're swinging your legs in the air. Below you, the boat looks like a kid's toy floating on the bathtub of the Pacific off the coast of Manuel Antonio.

It wasn't my first time parasailing, but it was the best so far. I sailed out around the archipelago beside Espadilla Beach on a 15-minute adventure. All of Manuel Antonio stretched out before me; I could see the highest peaks of Cathedral point and white sands of the beaches inside Manuel Antonio National Park, the road through town wound the opposite direction through the hills between hotels toward Quepos.

Fighting the waves on a banana boat

Of course, we try everything at Costarica.com. So after the parasailing tour we rounded up a couple of locals for a ride on the Aguas Azules banana boat. At $8 per person, it is easily the most affordable thrill-ride on the beach. We rocked the banana boat for about a half-hour, tossing, turning and twisting while desperately trying to hold onto the handles of the giant banana, but it was no use. No matter what you do, you're going to get thrown from the banana. And not just once either. At first the driver lured us into a false sense of confidence, but soon he was speeding among the waves, making quick turns and juking between swell while we wriggled like rag dolls on the back of the banana boat.

As it turned out, the waves were particularly rough that day. A major swell was wreaking turmoil along the coastline causing some pretty serious rip tides and making for choppy seas. We attempted a surf lesson, but it was short lived. The instructor gave me a rundown on popping up on to the board and we headed into the waves. Unfortunately, the surf was too strong and after a couple of waves the instructor had to cancel. He had more important things to do.

Without a lifeguard on Espadilla Beach, the instructor and the rest of Aguas Azules take it on themselves to make sure beachgoers are safe.  My instructor, had already personally saved one boy from a rip tide and, within 5 minutes of ending our lesson, rushed off to the south-end of the beach to warn a group standing in the middle of a rip tide.

High speeds, high waves, high in the air over Manuel Antonio in Pictures