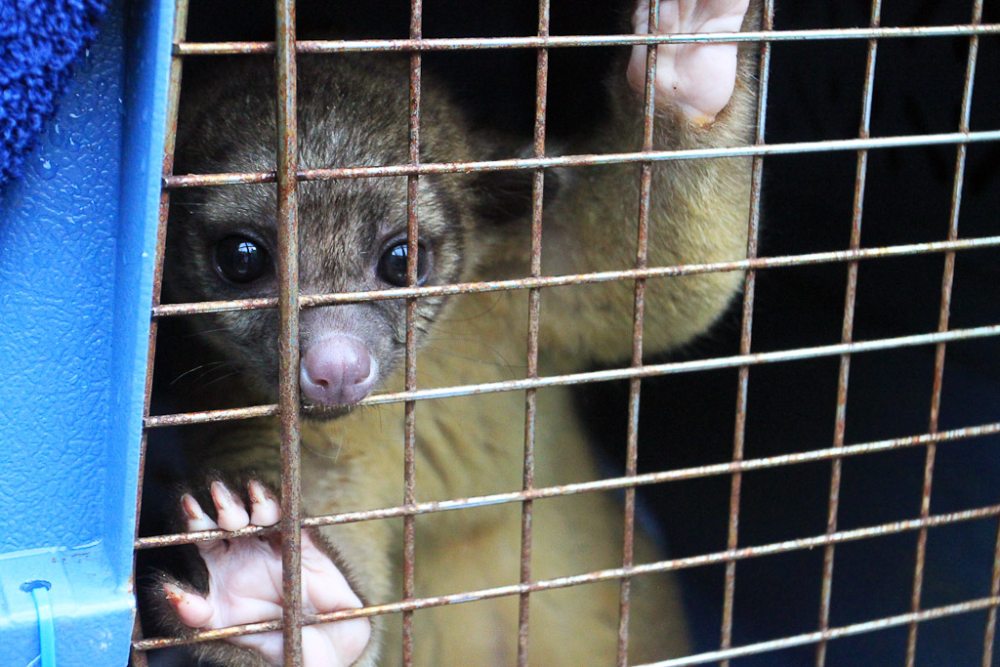 Protecting the kinkajous in Manuel Antonio

Protecting the kinkajous in Manuel Antonio

They found the kinkajou curled up in a cardboard box with a parakeet dropped at the doorstep of the animal rescue center. With its golden brown fur, long tail and big black eyes, it looked like a child's stuffed animal. It's easy to understand why someone would want it as a pet.

The kinkajou's soft, fluffy coat has often made it a target for poachers looking for fur, meat or pets. But in Costa Rica, hunting and owning exotic animals like kinkajous can carry a $2,000 finethanks in part to new reforms to the Wildlife Conservation Act signed into law in 2013.

That's why Dr. Sam Trull, primatologist and vet tech at Kids Saving the Rainforest, thinks the kinkajou was probably stolen from his family, kept as a pet and finally abandoned at the door of their animal rehabilitation center in February.

The kinkajou spent the next six weeks recovering along with 51 other animals as part of Kids Saving the Rainforest Rehabilitation Center in Manuel Antonio, which rehabilitates exotic animals including sloths and monkeys. Animals unable to return to the wild live permanently in the Kids Saving the Rainforest Sanctuary, but for those that can, the rehabilitation center acts as a hospital and hotel until the animals are ready for release. And at seven months old, it was time to release the kinkajou back into the wild.

We caught up with Kids Saving the Rainforest President Dr. Jennifer Rice, Trull and a crew of volunteers on an evening in late July at Midworld, an adventure park thirty minutes outside of Manuel Antonio. The crew came prepared with rubber boots, nets and a bug-eyed kinkajou tentatively peering out the bars of a small cat carrier.

With the help of Midworld owners Jamie and Jennifer Roberts and neighbor Scott Nieminen, we rode into the depths of 2,500 acres of farms, primary and secondary rainforest. Slipping and sliding in the dusk light, we rode ATVs and off-road buggies up into the hills along a red clay trail.

When the trail narrowed, we trekked into the forest on foot looking for a good spot with fresh water for the kinkajou to drink and a dense canopy for it to roam. Chopping through the branches of a fallen tree, Miguel, Midworld's resident caretaker and naturalist, cleared the way with a machete.

At the bottom of a hill, in the dusky luminescence and humidity of the primary rainforest, we found a location beside a river to set the kinkajou free.

Trull warned us ahead of time that despite the animal's cute demeanor, kinkajous can be very aggressive when they're scared.  But when it came time for him to run off, he didn't want to leave. The kinkajou slinked around to each of us, smelling us, looking at us, and even crawling up on to Jamie's leg.

It wasn't until the kinkajou saw spotted Miguel running his hand up a tree that the Kinkajou got the hint. Following Miguel's hand the kinkajou ran up the trunk and disappeared into the canopy. As soon as he was out of sight, we ran off to prevent the kinkajou from following us.

Walking back, Trull said she was happy with the location and thinks the kinkajou would thrive. "He has room to learn the ropes of living outside the cage," she said.

A month later, Midworld employees spotted an unexpected visitor climbing in the trees outside Midworld tour headquarters. A few hours later Jaime and Jenna visited Miguel's house to find the kinkajou yawning comfortably in the corner of the bathroom. It was time for the kinkajou to go back to the sanctuary.

Like many other animals taken as pets, the kinkajou wasn't able to make it on its own. But that's why Kids Saving the Rainforest has a sanctuary; a place where animals that can't readjust to the wild can live comfortable lives with expert care.

Soon after, Jamie and Jenna adopted the kinkajou crowning him "King Julien" the king of the lemurs from the movie Madagascar. Thus, King Julien will live out the rest of his days at the Kids Savings the Rainforest Sanctuary nibbling fruit and napping the days away.

Protecting the kinkajous in Manuel Antonio in Pictures