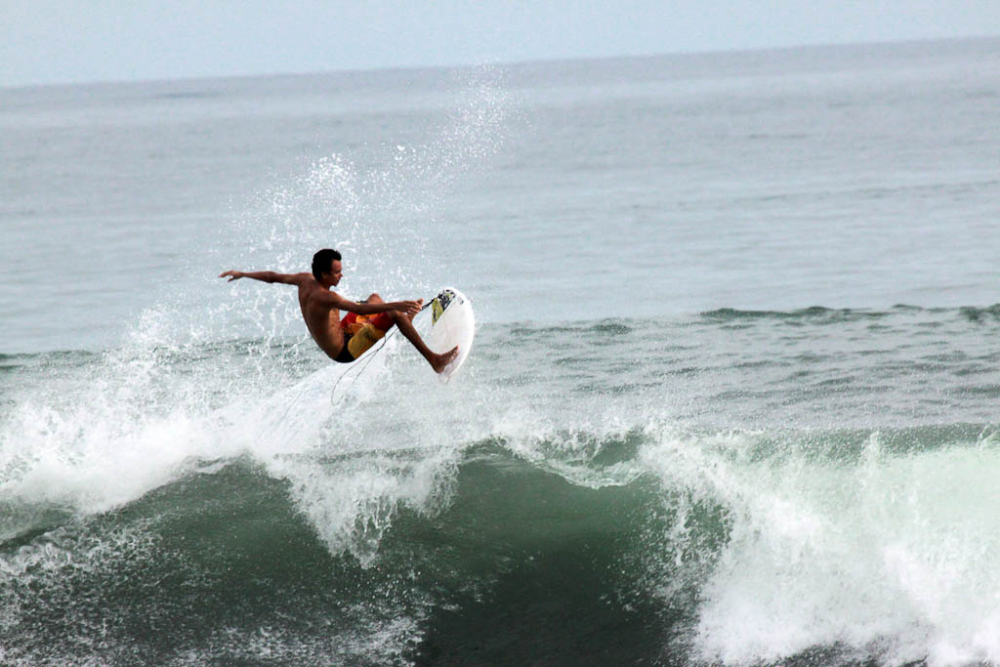 You know your job is good when you're sitting on the beach at sunset sipping on ice cold beer watching local pro surfers go head to head on legendary waves.

From 4 p.m. until sunset, local talent rides the waves in the surf behind the Backyard Bar while locals and out-of-towners congregate on the beach stretching out on blankets, sitting on driftwood or watching from the bar's patio with cocktail in hand. Local pro and emcee Salsa Boy, follows the action on a microphone announcing riders and giving the play by play.

Out past the waves, surfers scour the horizon looking for the perfect swell that will ride them to victory. When a good swell rolls in, a paddle battle ensues for rights to the wave. The first person to stand claims the wave, but that's only the beginning for the winner. The real challenge comes out in the ride. Each wave is different, and each rider looks for the best way to ride it. Some carve down the line of the wave gaining speed to catch air by leaping from the top of the wave while others, turn back at the last moment in a quick 180 degree turn that sends sea foam flying in an arc over the wave. With each trick, the crowd cheers the rider on.

Occasionally, the off-shore wind matches a big swell as a rider disappears underneath a massive barrel as the wave crashes over his head, but only for a moment before he shoots out the other side to the resounding applause of everyone on the beach.

When the final slash of red burns up on the horizon a horn sounds and the contest is called to an end. A rush of sandy-beachgoers crowds the bar, the dance floor and the barbeque as the party moves into full-swing.

Hours later after the crowd has thinned, the music dies down and the winners are announced. On Saturday June 8th, the prize went to Maykol Torres, a 21-year-old Jaco local, who'd never before won the competition. You could see the excitement in his smile as he grabbed the mic and expressed his gratitude in a rambling speech to his friends, the bar owner and all the people watching.