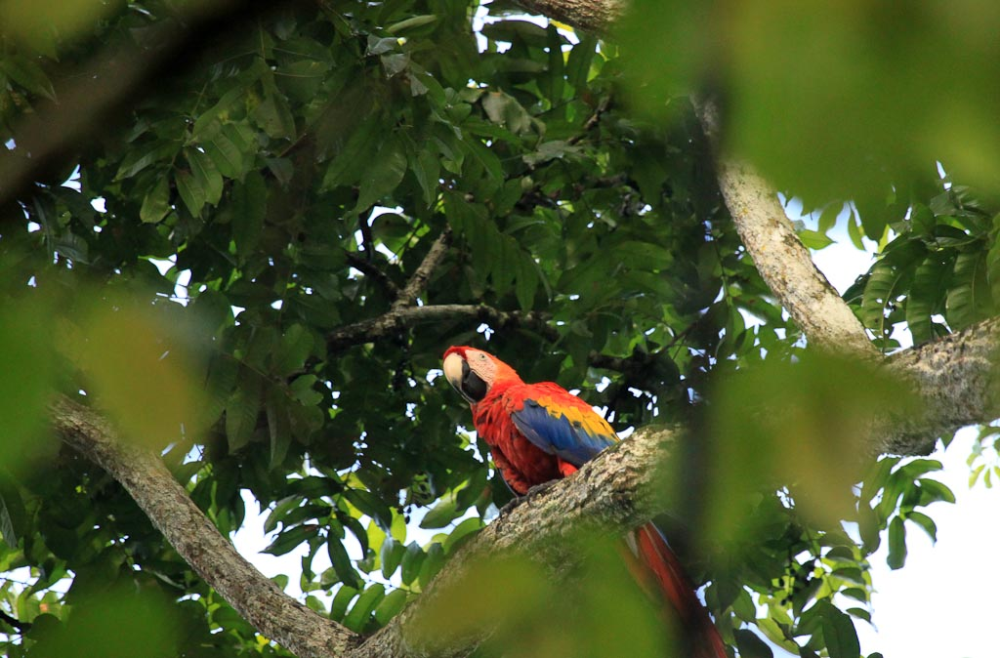 What you are missing on the way to Jaco

Blog > Travel > What you are missing on the way to Jaco

What you are missing on the way to Jaco

Jaco's vibrant nightlife and sandy beaches attract visitors from around the world. Travelers and locals alike escape San Jose on coastal highway (Route 34) to crowd Jaco's beaches and bars. But while everyone's looking for the coastline, they'll drive over the famous Tarcoles River and its 2,000 crocodiles; the Carara National Park and its scarlet macaws and the Pura Vida Gardens and its Pacific coastline views.

I spent a day exploring the attractions on the way to Jaco to figure out what's often overlooked and what's worth seeing on the way to the beach.

To make the best of the national park, you've got to wake up early and hire a guide. So that's what I did. By 6:30 a.m., I stood at the entrance to the Carara National Park greeting my guide, Armando. Still yawning, I entered into the transitional rainforest where dry meets tropical rainforest. Cactus clings to the branches of umbrella-shaped Guanacaste trees while vines leech down from the canopy of the tall, straight trunks of the rainforest trees. In the first hundred yards we encountered a boa constrictor sleeping under the wide leaves of a rainforest shrub, howler and white-faced monkeys sharing fruit from the same strangler fig tree and scarlet macaws squawking and flying between palms (one of only two parks in the country that still has wild populations of the colorful birds).

Walking through the secondary forest of fast-growing fruit bearing trees like bananas and figs, we ran across coatis and agoutis scavenging amongst the forest floor for breakfast. Among the marshes and lagoons, filled seasonally by overflow from the Tarcoles River, we saw brown basilisk lizards, herons and the purple gallinute (a plum-colored duck-like bird). In the depths of the rich, dark primary forest where trees towered hundreds of feet over our heads the red-rump of the black-throated trogon sang while a black and green poison dart frog leapt into a patch of foliage.

The Pacific highway passes over the Tarcoles en route to Jaco. Underneath, 2,000 crocodiles sunbathe on its shores and slither through its waters. In the nearby town of the same name, locals offer safari riverboat tours to get up close to the world's largest reptiles.

Within a minute of leaving the shore, we encountered our first croc of the day: a small, young American crocodile with a narrow snout and pale, off-white scales sunbathing on the muddy riverbanks. Cruising upriver we passed by waterfowl like the turquoise-browed motmot with brilliant blue, burnt copper plumage and the endangered roseate spoonbill with its bright pink flamingo-like feathers. Among them, the crocodiles waded in the mud and slid in the river.

The boat took us right up beside an 18-foot behemoth sunbathing on the shore. The guides reached down and grabbed his tail from the water and each of us took turns holding it in our hands to feel the weight and texture of its leathery skin. Amazingly, the croc didn't even flinch; in fact, it couldn't have cared less about us.

Beside it, a female slunk up beside the boat, its golden eyes peering out from the water. Our boat's captain jumped off onto the shore with a handful of raw chicken and fed the female. He'd hold his hand out over the water while she leapt up like a trained seal and snapped at the chicken.

After the rush of the crocodiles, I opted for something a little more relaxing like a stroll through a garden. Pura Vida Gardens covers 60 acres along the ridgeline of mountains 2,000 feet above Jaco and the Pacific coastline. Heliconia, palms and tropical flowers bloom from the manicured shrubs, plants and trees that line the pathways.

Viewpoints dot each path like exclamation points, showcasing the beauty of the surrounding rainforest as well as the Pacific coastline. Down near the tip of southern edge of the gardens is a small restaurant with incredible views: One of Costa Rica's largest waterfalls, the Bijagual, roars down to the left while the pacific ocean glitters in the afternoon sun off to the right and the small beach town of Jaco reclines behind the 2.5 mile stretch of sandy beach and rolling waves.

What you are missing on the way to Jaco in Pictures