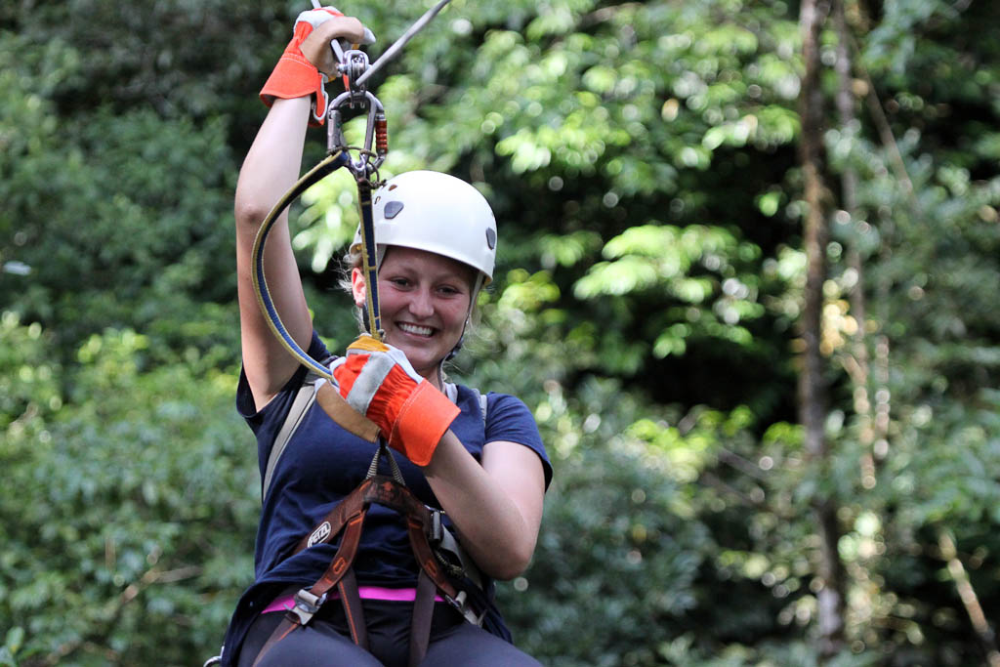 Riding the lines on the Original Canopy Tour

Blog > Travel > Riding the lines on the Original Canopy Tour

Riding the lines on the Original Canopy Tour

So there you are standing on platforms attached to giant tree trunks a hundred feet above the forest floor. In front of you, people are flying between the trees on zip lines and giving you that same feeling you had the first time you saw the Ewok village in Star Wars –  except there's no Ewoks, you're next and I'm probably the only person in the world fantasizing he's on the forest moon of Endor while zip lining.

Original Canopy tour is – as its name implies – the first canopy tour built/opened for business in Costa Rica. They also claim to be the first zip line tour in the world. Darren Hrenkiuk moved from Canada to find the perfect location to fulfill his dreams of transporting people between trees on giant steel cables. Starting in 1994 with a single cable and rappel, the Original Canopy Tour has developed into a two- to three-hour ride with a 30-foot Tarzan swing, 15 cables, a 115-foot rappel and a climb up a rope ladder built in the center of a 10-story hollow tree.

The Tarzan swing is first on the Original Canopy Tour's list of thrills. It's smaller in stature than the swings at some of the other Monteverde canopy tours, but at 30 feet it's still high enough to give you that sinking feeling before you step off the edge and swing like a monkey harnessed to a vine.

After adjusting your tolerance for heights with the Tarzan swing, the canopy tour starts. There's a certain amount of difficulty at Original Canopy Tour that you don't have at their competitors. Let's just say it'd be wise to listen to the bit about applying the brake to avoid slamming into a tree – or alternatively braking too hard and getting stuck climbing hand over hand pulling yourself along the cable to the next platform.

Really though, that's what gives the Original Canopy Tour its panache; You feel like Indiana Jones, relic in hand, sliding down a zip line to escape an ominous band of natives.

Then you reach a platform with a rope ladder attached. You question what it's for, but assume that it couldn't possibly be part of the tour. Minutes later you're rappelling down to the forest floor then climbing through the hollow trunk of a gigantic fig tree up that same rope ladder. Hand over hand you climb through the tree trunk maybe fifty into the air, then pop out the side and continue up the ladder back to the platform. And that's just the middle of the tour.

The next seven lines get increasingly longer as you move from inside the forest, to over the top of the canopy above a valley. Standing on the second to last platform, you can see all of downtown Santa Elena before flying more than 1,500 feet to the opposite mountain.  The last cable is even longer, stretching a half-mile back to the start of the tour. Looking out across the landscape as you glide across it, just for a second, you remember that you're not in a movie; this is real life.

Riding the lines on the Original Canopy Tour in Pictures