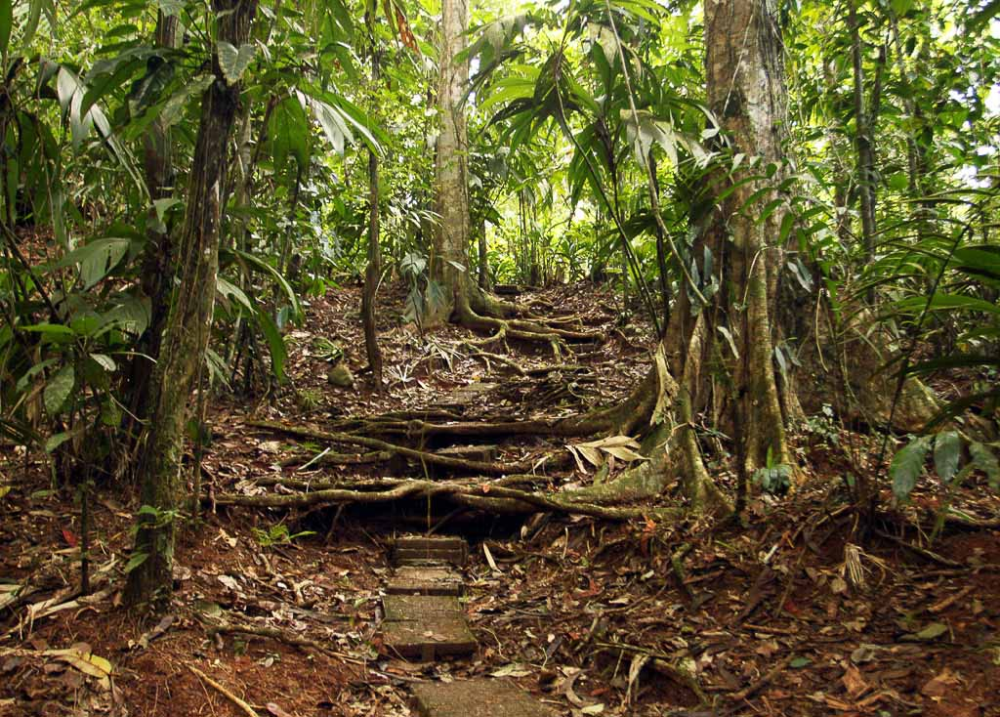 In the daytime, the beautiful old growth forest of towering trees, hanging vines and green plants soak in the light that filters through the canopy. Day hikes at the La Selva Biological station in Puerto Viejo de Sarapiquí guide visitors on a tour into a different world wedged between the Puerto Viejo and Sarapiquí rivers where paved trails creep through undergrowth while monkeys swing overhead and bird calls echo in every direction.

But at night, it all disappears, and the forest floor is shrouded in darkness. Night hikes at the La Selva showcase the truly bizarre: a land crab scuttling from underneath a log, fungus oozing smoke tendrils, bioluminescent moss, and ominous glowing eyes looking back into the beams of our flashlights.

A mile or so off the main road leading into Puerto Viejo de Sarapiquí, past a palmito (heart of palm) farm and a village, the forest canopy emerges on the horizon. From there it’s about another mile to the entrance of La Selva’s roughly 3,900 acres and 31 miles of hiking trails carving paths through a giant hedge maze of tropical, wet forest.

As a group of five, plus our guide, Ramier, we walked through the forest for more than two hours. We walked under the towering canopies of Costa Rica’s tallest species’ of trees (some reaching up to 200 feet) and past sleeping two-toed sloths and vermiculated screech owls.

Deep in the forest’s understory Ramier spotted a double-toothed kite hawk (a blue-grey hawk similar in size to a pelegrin falcon) following a troupe of Capuchin monkeys; and on the forest floor we saw collared peccaries (wild pigs), strawberry poison dart frogs and a golden-eyelash pit viper.

Curious to see the contrast, I signed up for the night hike. Well at dusk, everything changes. Howler monkeys bellow while birds sing a chaotic harmony as the sun sinks behind the canopy and the nocturnal animals wake up from their afternoon slumber. Joined by a couple from Oregon and our La Selva Guide Geiner (pronounced Hay-ner), we prepared for the journey back into the forest. After dinner at the lodge, we suited up with flash lights, water bottles and light raincoats for the trek.

Before even reaching the trails, we came met our first creatures of the night; a red-eyed tree frog clinging to a branch followed by an army of leaf cutter ants silently marching and a pair of golden orb spiders testing the tensile strength of their webs. Nearby the residents’ cabins we saw the glowing black lights of a research project where scientists used the light to attract butterflies, moths and other insects for collection on a sticky sheet.

Once on the trails, our guide Geiner carefully scanned the trees and the forest floor looking for wildlife and watching out for snakes, particularly the fer-de-lance snake—one of the most toxic snakes in Costa Rica. While searching, Geiner pointed out a number of small frogs as well as large insects and spiders, all of which would’ve been impossible to notice without his trained eyes.

In the canopy, he spotted a kinkajou (also known as a honey bear) leaping between branches. On a bridge, we investigated a stream for the reflective eyes of Caimans (small alligators), but saw instead the flickering lights of fireflies.

Circling back toward the lodge, we headed through the Arboretum, home to roughly 80 different tree species. There, a fer-de-lance snake lay coiled in a cluster of dead leaves. Curled against the roots of a tree with its head raised, the snake stared back at us flicking its tongue. Just feet away from us, was one of the deadliest snakes in Costa Rica (known for its toxicity and aggression), staring us down.

Though we passed without a problem, the thought of it never really left my mind; even after the tour ended. I walked home through the dirt roads outside the reserve with only my cellphone as a flashlight, stepping lightly and imagining a snake in every twig I crossed.