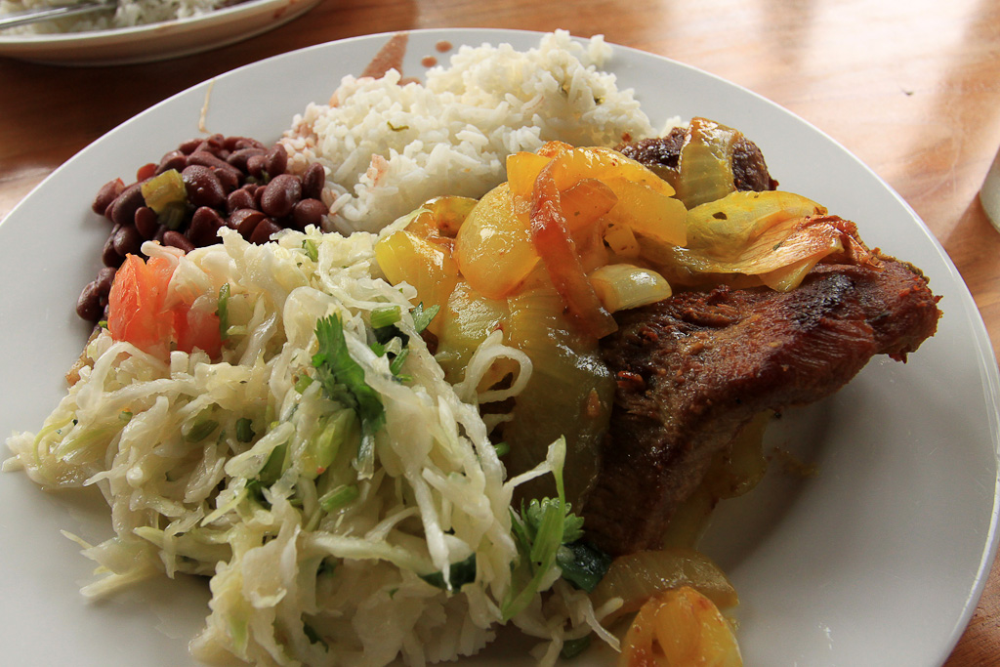 Sometimes I like to pretend I'm Anthony Bourdain; eating at all the best places, staying at comfortable hotels and getting drunk with the locals. But then I remember: I'm broke.  I've never let that stop me though, and nor should it stop you. Here's how to eat and drink like a king for $25 a day in Jaco.

Wake up leisurely. Splash some water on your face, comb your hair with your fingers and make your way out for the hotel's breakfast buffet – most hotels in Jaco include a continental breakfast in the price of the room and as a continental breakfast-activist, I recommend you protest any hotel that would prevent you from eating the most important meal of the day.

Plus, you'll need the rice and beans to sop up the extra booze you drank so that you could pass out in whatever hovel you could afford – I once stayed in a garage converted into hotel room on the border of Panama for $20 a night… come to think of it I really got ripped off there.

I won't presume to tell you how to spend your day, but here's a few cheap options to keep you entertained 'till lunch.

Costa Ricans have a healthy respect for lunch. Or I should say appetite? Regardless, check out Soda Rustico where $4 will get you a massive plate of Costa Rican down-home delight, also known as a Casado. The dish gets its name from the Spanish word for 'married' because of all the different sides that come with dish.

At Soda Rustico, you'll have your choice as you slide through the buffet picking out whatever looks tempting. I like to stick with the basics: some fried fish (it is the beach after all), rice, beans, a salad and picadillo (squash).

Beat the heat at Heladaria

At El Barco Right around 2 p.m., the sun starts to beat down savagely as your shirt glues to your back with sweat. That's when you make a hasty retreat to Heladaria El Barco, an Italian ice cream shop across from the Manantial pharmacy on Pastor Diaz. I'm quite partial to coconut and coffee gelato, in a two-scoop cone for a cool $2.50.

Raise your glass as the tropical sun dissolves into the Pacific from the safety of the Bohio sports bar. From its beachfront views you can watch as surfers catch the last waves while sipping on one of the happy hour specials, $.75 for beers and half-price cocktails from 5 p.m.- 6 p.m.

After a couple of drinks, it's time to eat again. But you've already spent $18 and you're hoping to squeeze at least two more cocktails out of that $25. I've got the solution. Follow your nose up the west side of Pastor Diaz until you see a guy grilling burgers. Not the best you've ever had, but as they say alcohol is the best spice (and $2 ain't bad for a burger).

Check out the patio at Mono Verde, a chic, tapas bar on Pastor Diaz, for its projection screen playing the latest football game or music videos; and DJ sets on Fridays. Enjoy the crowd, make new friends or people watch while enjoying $2 frozen margaritas served in a tropical flavors like kiwi, blackberry and my personal favorite, passion fruit. Drink until you run out of money, your friend passes out on the table or its time to move onto the next bar.

Enjoying Jaco on $25 a day in Pictures