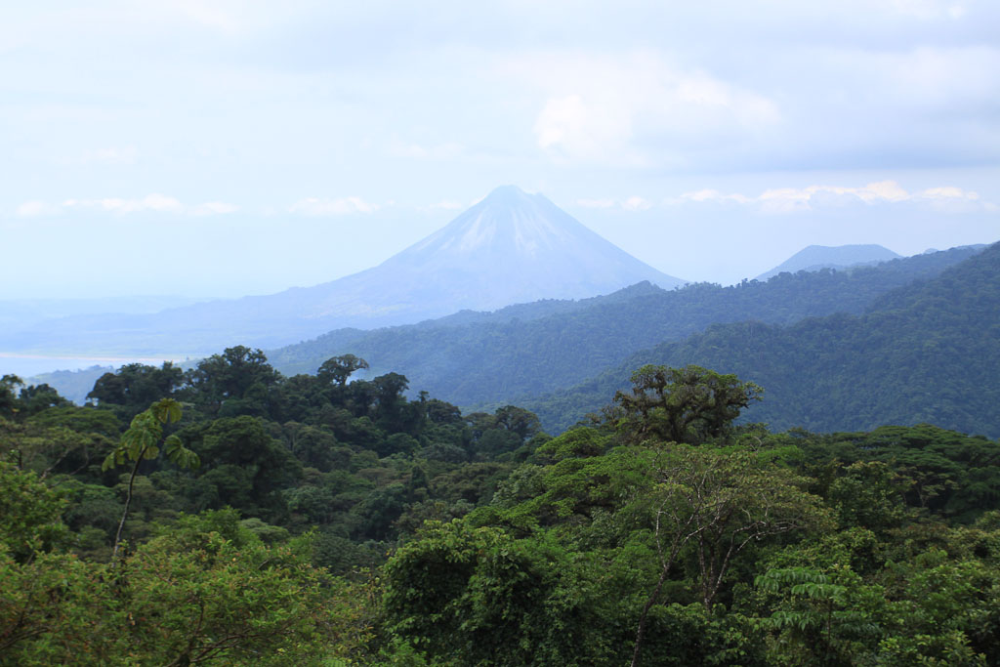 **Our travel journalist treks from Monteverde to Arenal on a six-mile journey through the wilderness of Costa Rica's largest rainforest reserve.

Scrambled eggs, fresh cheese, fried plantains and a heap of gallo pinto (mixed, rice and beans) steamed on the plate in front of me. Spreading strawberry jam over a piece of toast, I savored the meal with my eyes.

Before the day was over, I'd cross through the Children's Eternal Rainforest – Costa Rica's largest rainforest reserve. Starting at the San Gerardo station in Monteverde the trek weaves through mountains and river valleys to the shores of Lake Arenal. The Children's Eternal Rainforest, managed by the Monteverde Conservation League, has received donations from 44 different countries to buy back the rainforest; including forest destroy by farmers for pastures. In total, the reserve covers nearly 56,000 acres of old growth and secondary rainforest from Monteverde crossing to Arenal.

After polishing off my second cup of coffee, I walked back to my room and put on my thickest pair of socks. My pack leaned against the bunk bed. I ran through a mental checklist of all the equipment inside: two pairs of jeans, six shirts, seven pairs of socks, underwear, toiletries, books, cameras, lenses, med kit, lap top, cellphone, chargers and extra batteries; everything double-wrapped in black trash bags, except a point and shoot camera and a water bottle.

Eladio, my guide, finished his coffee in the kitchen. "Ready?" He asked in Spanish. Turning off the dirt road leading from San Gerardo Station, we took our first steps onto the Caño Negro trail – named after the river that passes through.

The night before I left, the caretaker at San Gerardo Station warned me about crossing Caño Negro River. He said that sometimes that water goes up past your waist and I'd have to cross it five times before reaching the end of the trail.

I tightened my hip belt and adjust the straps on my pack as we worked our way under the dense cover of the forest canopy. Dry leaves crinkled like wrapping paper under our feet as we shuffled along the forest floor. The trees were young and closely packed with narrow trunks – part of a regenerating secondary forest.

Moss began to appear on the rocks as we entered a gorge with a stream running through its center. Thinking this was the first of five river crossings, I laughed at my anxieties and skipped from rock to rock without getting my shoes wet. Four more times, we crossed that stream. Each time, I tightrope walked across a mossy log or found a set of flat stones to stand and cross to keep dry. Then I heard it. We crossed over a ridge and descended into a wide and deep valley cut between the mountains. Stepping out from the forest undergrowth, we stood at the banks of the Caño Negro River.

Deep in the river & high in the mountains

My bag suddenly felt ten pounds heavier. The weight of my electronics sank into my gut. All my work, stored in their hard drives and memory cards. My lap top, my connection with my family and my single most important tool. My Camera. My lenses.

Once, while canoeing down the Peñas Blancas River, I watched a couple float into a submerged log flipping their canoe and soaking all their high-end electronic equipment; water dripping the LCD screens of their Canon Mark II camera as they lifted it out the water.

But I told myself I was prepared as I could be. We stopped at the river for a drink. Eladio took out an empty bottle and filled it with water from the river. I tightened my shoes and looked up to see Eladio was already halfway across the river; the water up to his waist.

The current pressed steadily against my calves as I worked my way into the deepest part of the river. Standing in its center with all my technology hanging on my back, a foot above the rushing water, I couldn't help but smile. Two opposing forces, one carved the river valley while the other made the microchips and processors lying dormant and useless in my bag hovering inches above the river.

Crossing the Children's Eternal Rainforest in Monteverde in Pictures