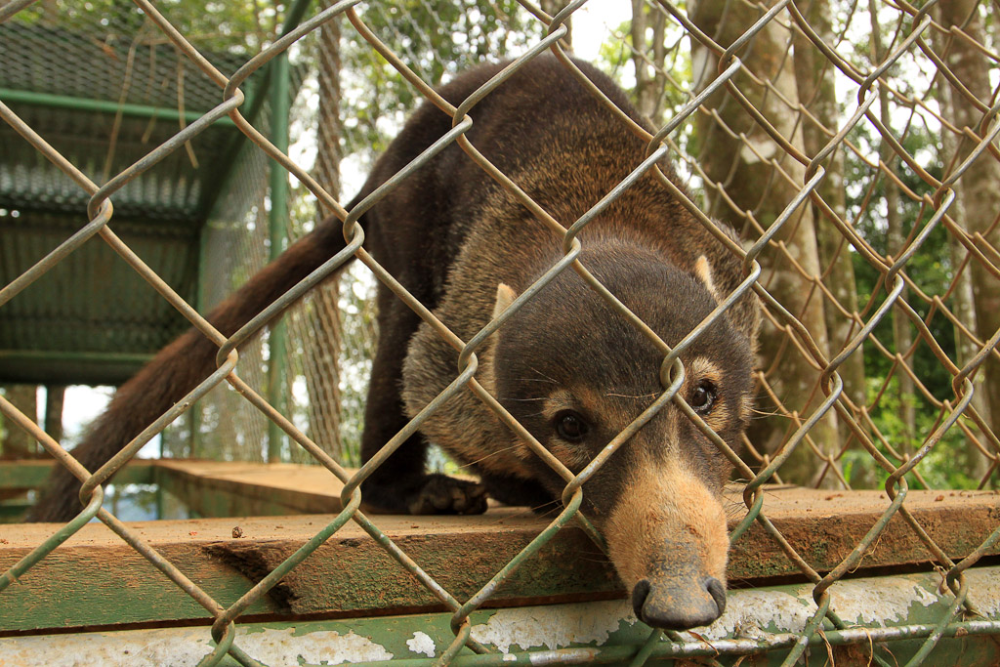 Tubby the paca escaped into a hardware store in Uvita. He's one of the world's largest rodents. Like an oversized guinea-pig with white spots, Tubby scurried between aisles of wrenches, hammers and screws looking for a dark hole to hide. That's when the store owner called in Mike Graeber to catch him.

Now Tubby spends most of his day sleeping in his enclosure at the Osa Mountain Wildlife Sanctuary, a non-profit wildlife rescue center in the Costa Rica's Central Pacific area. Tubby is just one of 47 animals living in the sanctuary, each with its own story.

Ruby, the scarlet macaw, waddles across the floor of her enclosure, her tail feathers plucked. Mike, owner and caretaker at the Osa Mountain Wildlife Sanctuary, figured her previous owner plucked the feathers, which go for $200 to $300 a piece, before abandoning her on the side of the road. Mike found Ruby fighting for her life against a pair of stray dogs, unable to fly away because of her missing tail feathers.

Ruby is one of many abandoned animals that's come Costa Rican animal shelters in recent months due in part to new laws and fines - up to $2,000 - for owning exotic pets. Concurrently, Costa Rica has decided to close down its zoos and send some 400 animals to shelters for rehabilitation and release putting stress on sanctuaries like the Osa Mountain Wildlife Sanctuary to accept more animals, when they're already at capacity.

The Ministry of Environment, Energy & Ocean (MINAE) is in charge of finding shelters for animals from the closing zoos, illegal animal trade and drug busts. MINAE places these animals in non-profit animal sanctuaries and rescue centers like the Osa Mountain Wildlife Sanctuary.  Nearly every day Mike gets requests to take new animals, he said. Already, MINAE has asked to take on a Puma from a San Jose zoo, but Mike said he had to decline. He just doesn't have the space.

Mike moved to Costa Rica in 2005. Though he's spent 40 years volunteering at wildlife shelters in the U.S., he didn't expect he'd start his own shelter in Costa Rica, Mike said. He wanted to sit on the beach and sell banana bread. And that's what he did. For years, Mike, known in beachside town of Dominical as "Banana Bread Mike", sat in a hammock sold snacks to locals and tourists.

It didn't take long though before he got restless. Mike couldn't help but notice the number of stray dogs wandering around Dominical Beach. After adopting half a dozen dogs, he realized he needed to do more so he started a non-profit organization to spay and neuter local animals called DAWG, Domestic Animal Welfare Group. Over the years, the program has grown to help tourists adopt animals in Costa Rica and   take the pets back to the U.S. The organization now spays or neuters 300 animals per year and has found homes for 400 animals in the last two years.

But Mike's plans have only gotten bigger. He has since left DAWG and founded the Osa Mountain Wildlife Sanctuary with the help of business partner Dannia Segura Jiménez and a group of American investors. Finished in February, Mike built the sanctuary by hand applying years of construction experience from his career in the U.S.

Today, the Osa Mountain Wildlife Sanctuary's mission is to rehabilitate and release as many animals as possible. Since opening in February, the sanctuary has released four owls, nine parrots, a hawk and a deer.

But many of the animals that come in to the shelter can't be released. Some, like Sofia, a young agouti who loves to be scratched behind her ears, are too domesticated to ever make it in the wild on their own. Others, like Pedro, a young white-faced monkey caught during a drug bust, are evidence in court cases and must remain at the sanctuary until the case is finished.

Now Mike's running a 60-day fund-raising drive to make improvements on the shelter. He wants to expand the sanctuary with larger enclosures, a nursery and more equipment for veterinary care.

A few days after catching Tubby in the hardware store, Mike had a visitor to the shelter. He pulled up in a truck, hunting dogs yapping wildly in its bed. The hunter claimed he owned Tubby and demanded Mike to give it back to him. Mike declined. He knew that Tubby would likely end up on a dinner table if he returned the paca to the hunter. Instead, Mike offered to call the police. The hunter relented and left empty-handed. Tubby, none the wiser, slept the day away in the warmth of his den at the Osa Mountain Wildlife Sanctuary.

Costa Rica's wildlife sanctuaries: filled to the brim in Pictures