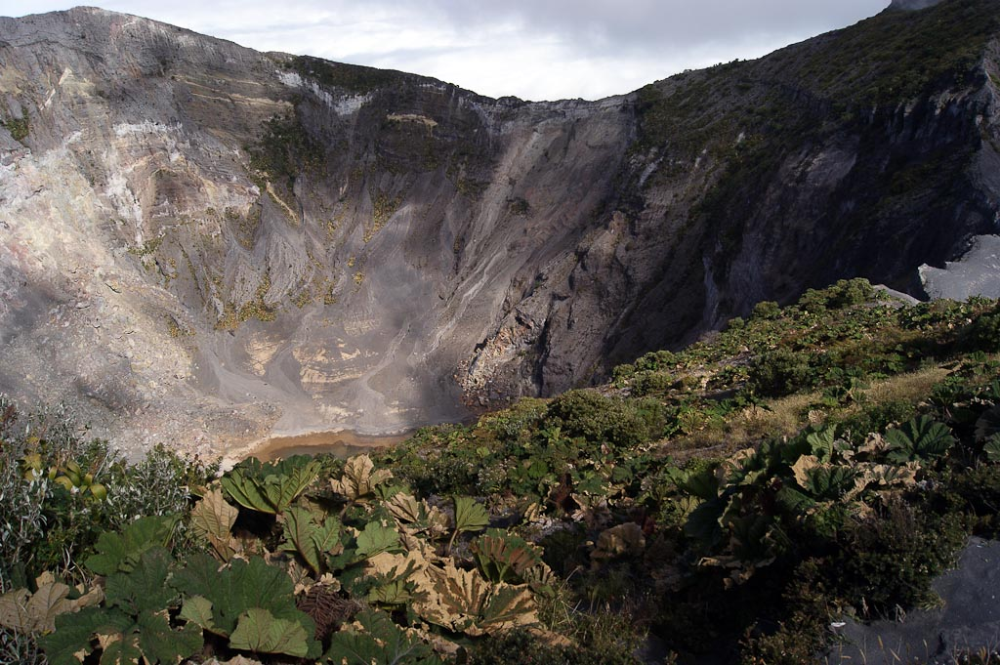 The last time the Irazu erupted its ashes fell as far away as Nicaragua. Its blast covered the nearby city in a blanket of ash a foot deep, destroying the coffee fields and forcing out the city's residents. But the city of Cartago survived, and while the volcano's still active its last eruption was 50 years ago.

Today, 5 craters at the peak of Irazu serve as a reminder of the volcano's fury. Each of the craters is made of a ring of igneous pebbles, sand and dust; devoid of plant life except for patches of scrub grass. Walking across one of the craters to the main viewing area visitors can see a toxic pool of water, sulfur and copper oxide that collects to form a chemical green lagoon at the bottom of the 985-foot-deep main crater.

The Road to the Top of Irazu

Far below in the valley, the ash has long since settled into the soil providing some of the richest farmland and pastures in all of Costa Rica. Driving along the switchbacks that lead up to volcano's peak, visitors can see fields of carrots, potatoes, cabbage, asparagus, tomatoes, onions and more. Dairy cows graze on the dense, lush grass and fields of yellow wild flowers dance in the breeze.

Eventually the fields and small towns give way to grasslands and a variety of tall trees on the ascent. Farther up still, the air grows thinner and the habitat changes again. Lichens, shrubs, small trees and scrub grass cover the landscape. Green, broad-leafed plants known as Poor Man's Umbrella's line the side of the roads and red Trumpet Flowers dot the Martian like landscape.

Before reaching the peak, there's a chance to view Costa Rica's most recently active volcano, Turrialba. Far off in the distance, the fumaroles—a volcano's blend of steam and gases—can sometimes be seen spewing from its peak; often though, the sight can be shrouded by cloud cover.

At the peak itself, the weather changes drastically. What may be a beautiful sunny morning in Cartago, can be a frigid, damp morning at the top of the volcano where gusts whip around the peak and clouds roll over the craters like a dense fog.  However, the weather often oscillates between sunny and foggy as the clouds pass through craters. Relaxing and waiting out the weather at the edge of the viewing area is the best chance to see the depths of the central crater.

When the clouds do come in a warm jacket can make the difference between an enjoyable volcano tour and waiting for your tour group in the peak's coffee and gift shop, which by the way is a nice spot to warm up with a cup of coffee and a pastry.

Besides the coffee, hanging around the shop will likely make you friends with the local fauna. The long-nosed Coati—a cousin of the raccoon with all the bandit-like qualities— often come in packs scavenging picnic tables and trash cans for leftovers.

On a clear day at the peak visitors can see across the expanse of Costa Rica, from the Pacific Ocean to the Gulf of Mexico; one of the few places in the world to view both oceans at the same time. Looking out from the harsh volcano peaks to the lush, green mountainsides, it's interesting to think how a power so destructive could also foster so much life.

Costa Rica To Do List: Irazu Volcano Tour in Pictures