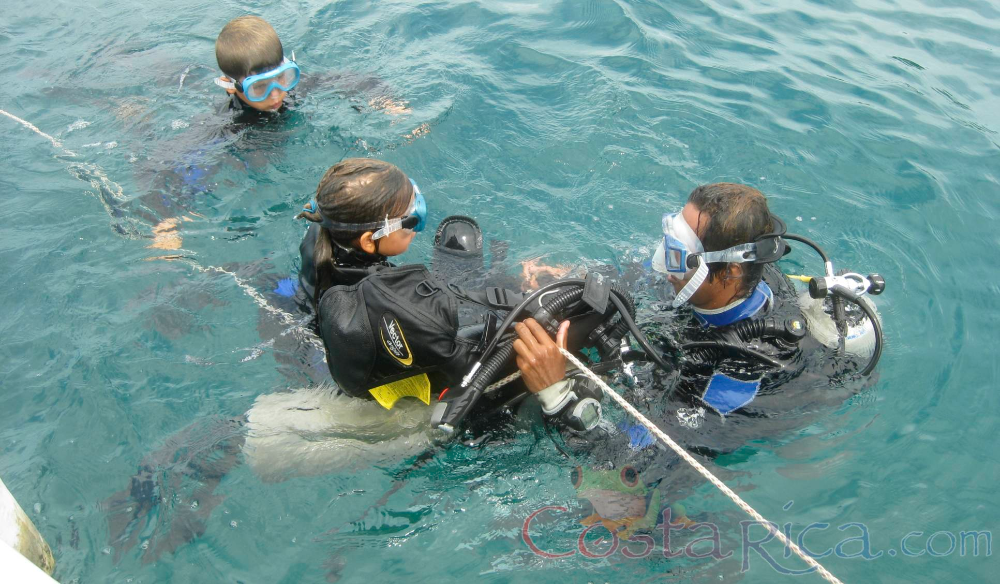 Today was the big day, and I could hardly contain my excitement. This morning would be my first open ocean dive at Punta Gorda, or Fat Point, a site roughly 40 minutes from Playas del Coco. The playful family of spotted dolphins that trailed our boat en route seemed like a good omen.

Sadly, it was not. When we arrived, the current was much stronger than I had anticipated. With each wave that slammed against the side of the boat, yesterday's jitters crept back little by little. Looking around, I seemed to be the only one of Summer Salt Diving's ten-person group who was even slightly bothered by the rough waters. I slowly began readying my gear.

Attaching myself to 50 pounds of scuba equipment plus a 13-pound weight belt, I nervously jumped into the water -- and immediately began to sink. As the tide pulled me farther and farther from the boat, it was all I could do to keep afloat.

Five minutes later, I was still struggling to avoid being thrashed against the reef or swept out to sea. After swallowing what felt like a gallon of salt water, I nearly began to cry in frustration. Everyone else had already submerged without a hint of difficulty, and I could barely keep my head above the water.

Finally, Will yelled, "Inflate your BCD!" How simple: the Buoyancy Control Device. Why didn't I think of that?

One of the most useful pieces of equipment a diver has is the BCD. This is like an inflatable life jacket that can be either blown up or deflated with the push of a button. After activating the device, I floated effortlessly. My head rose above the surface and the panic subsided. I had been scared half to death, and really just wanted to get back on the boat and sob -- but I knew that I would regret that decision before my flippers even hit the deck. So, I pulled myself up by my fin straps, slowed my heart rate as much as possible, deflated my BCD, and down I went.

From that moment on, diving was effortless and dreamlike. We followed the rope of the anchor to the cement block at the bottom (Will called this "the cheese"), passing by a bright coral reef along the way. Every few feet we held our noses and blew the air out our ears to equalize the pressure.

As we landed, an enormous spotted eagle ray drifted by, weaving around a vast school of silver fish. The experience was nothing short of surreal. Between the feeling of weightlessness and a soundtrack that echoed footage of the 1969 moon landing, diving felt like being on another planet -- complete with alien animals.

Colorful sea urchins, red snappers, triggerfish, and fish I never even knew existed inhabit the Pacific Ocean. Angelfish, boxfish, needlefish and puffer fish flitted in and out of the reef in every direction. As the only beginner in the group, this was especially distracting -- and I was fairly self-conscious when I nearly kicked one of the advanced divers in the head. Luckily, he either didn't notice or didn't care.

As our group rounded a bend, Will pointed out a slithering moray eel poking its snout out of a crevice. It bobbed and weaved, warning us not to get too close -- as if anyone would dare. Buried just below the sand were a number of round rays that blended almost perfectly with the ocean floor. I marveled at how no one in our group -- including me -- was the least bit afraid of the marine life.

Anxiety does not stand a chance underwater; fear of the unknown can only exist at the surface. I gave myself a mental pat on the back for not chickening out, and tried not to lose my wits in the surrounding beauty. In reality, I could have stayed down there forever.

Unfortunately, this was not possible. After about half an hour underwater, Will noticed that one of the Danish girls was running low on oxygen. He pulled out a plastic gun, which shot out a line with a red flag that wiggled up to the surface. This alerted the captain to our location in the rough waters. We then ascended slowly, treading water for a three minute "safety stop" about 16 feet from the top. Above water, the captain threw us an orange inner tube and reeled us in. The rest of the group joined us about fifteen minutes later.

Our next dive site was closer to shore, at a small shipwreck near Isla Tortuga (or Turtle Island). "Don't expect the Titanic," Will said, "but it is pretty cool; not so fast, Genna. You cannot dive that deep until Thursday." Oh, well. I would have to experience the wreck vicariously through the others, but at least I could dive again.

As we descended, the very first thing we saw was a group of ten white tip reef sharks. I froze for an instant, more out of awe than panic. Fearing these gentle creatures is unnecessary, particularly at dive sites. Food is plentiful near rocks and coral reefs, and the last thing these non-confrontational predators want to munch on is a human being. That being said, the first glimpse of any species of shark always stops my heart for a second -- even after swimming with them on multiple occasions.

After studying sea porcupines, lobsters, parrotfish and a tiny algae-covered sea horse, Will asked me to demonstrate all of the skills I had learned in the pool the previous day. Thankfully, I passed the entire examination without a problem. Following about thirty minutes of bottom time, the group ascended and the dive master led us ashore to Playa Penca. There, we ended the day by practicing the proper use of a compass.

I was ravenous by the time we returned to Playas del Coco, and stopped by the Coco Palms restaurant for a bowl of miso soup and sushi with smoked salmon, avocado and cream cheese. The meal was absolutely phenomenal. I returned to Hotel Vista Azul, where I did yoga on the roof as the sun sank into the horizon. A million dragonflies buzzed about as the sky turned to pink and then black, creating the perfect backdrop to unwind.