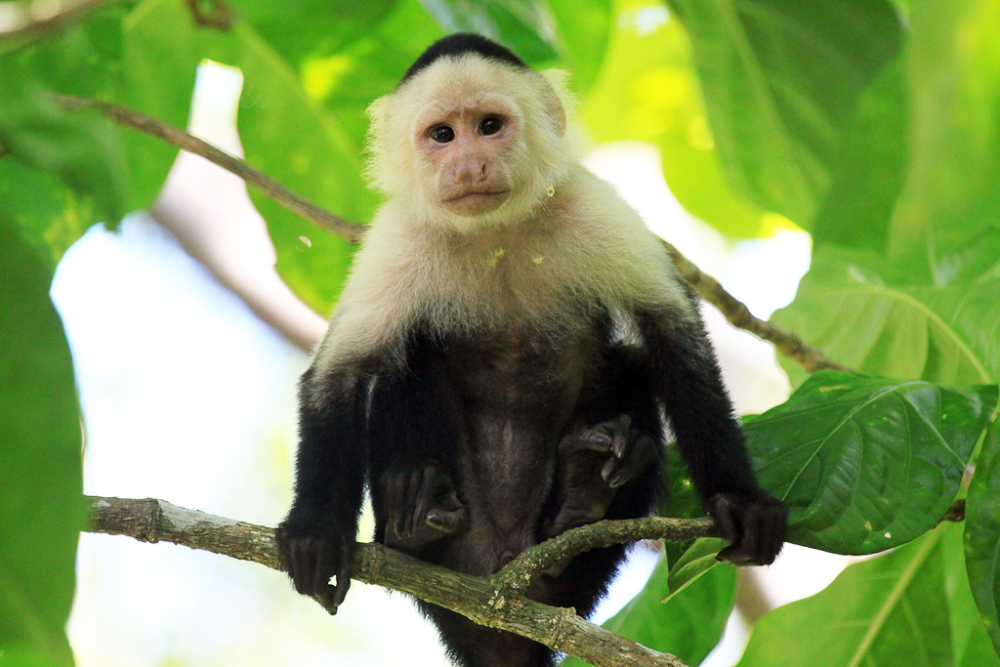 The morning sky dawned bright and blue, the perfect weather for a Cahuita National Park hike. After a quick breakfast, we met our guide for the 8 a.m. tour and walked from the company's Cahuita office to the park's entrance. Crossing the footbridge over Kelly Creek, we saw blue and white herons roosting in the overhanging trees, a fortuitous sign of things to come.

After paying a voluntary park donation, we set out on the wide, sandy trails. Actually "paths" might be a better word, as Cahuita's trails can be hiked with mere flip-flops, my footwear of choice. However, hiker beware: though the trails are easily hiked, venomous snakes live in the park -- closed-toed shoes or boots may be a better choice. Ignorance is bliss though, and I happily began our hike with only my flip flops and a bit of bug repellent.

Sea almond and coconut trees lined the path, and far in the distance, sunning iguanas perched on leafless branches. We counted at least five before moving onward, soon spotting two white-faced monkeys sitting in a tree by the path, scowling at passing hikers. Though the species is generally docile, many park visitors feed the resident capuchins with high-sugar, high-calorie fruits such as watermelon, which is not part of their natural diet. Buoyed by sweets, the monkeys can become more aggressive.

Skirting around the attentive monkeys, we passed by a majagua tree, which appeared to be more roots than trunk. Our guide explained that the tree's bark was traditionally used to weave sandals; this particular specimen was estimated to be more than 100 years old. Looking to our left, we saw a two-toed sloth lazing in a tree, cautiously watching the menacing capuchins just feet away.

The park's path was lined with other amazing species -- red mangrove trees, a Jesus Christ basilisk lizard (that literally can walk on water), long-nosed bats, and the bitter cane plant, to name a few -- and we explored with interest. Soon we arrived at a small river. Taking off our shoes, we forded the waters. When I emerged on the other side, I felt tiny coral thorns in my feet. Sitting down, I plucked them out gingerly before continuing on down the path.

We crossed into primary forest, and the canopy was thicker and taller than it had been before. There were large fungus spots on the trees which, our guide explained, meant the air is clean -- the fragile fungus is airborne, and would die in polluted air. With less light reaching the forest floor, we squished through mud and slipped along the trails. Soon, we reached an elevated path, and climbed up onto plastic decking.

Suddenly, our guide stopped and pointed: just five feet away, a young yellow eyelash palm pit viper lay curled around a tree branch. Its color clashed with the rest of the forest, and it frankly terrified me. Wishing that I had steel-toed boots and a jumpsuit to protect myself, I moved quickly away to a safe(r) viewing distance. Meanwhile, Vincent and our guide, entranced by the colorful snake, inched in closer -- I couldn't believe it.

As if to calm me, the snake refused to move even one scale. He was quiet and sleepy, and hardly cared for the humans interested in him. However, our guide explained that this snake species, though almost completely blind, has a very developed sense of smell and a preternatural motion detector -- even though we were five feet away and barely moving, he knew that we were there.

When we had our fill of watching the sleeping snake, we soldiered onward. I was still nervous, so when we walked off the elevated trail and onto the ground, I grew very attentive of the path and wildlife around me. Suddenly, Vincent stopped dead in this tracks and, almost walking into him, I glanced up. A howler monkey, not three feet in front of us, stood on the path. Our guide explained that he was old, and had probably been ousted from his troop by a younger, fiercer male. I felt bad for him as he crossed the path in front of us -- howlers are social and do not live well alone.

As we neared the ocean, the air got muggier and, all of a sudden, swarms of mosquitoes attacked. Our bug spray seemed to be pointless, as the insects pierced our clothes. Speeding up, we almost skipped the rest of the way to the beach, where cool breezes kept the bugs at bay. Arriving to white sand and blue water, we saw a group of tourists fascinated by a troop of white-faced capuchin monkeys begging for snacks.

Armed with the knowledge that we should not feed the monkeys, I watched the crafty primates pull faces and work their trickery -- they angled to swipe backpacks, drinks and any food they could reach, even if that meant stealing right out of people's hands. However, they weren't having much luck with their looting and so, when I bent down, a small female came to greet me.

Even though monkey mischief is legendary, I was surprised by her bravery -- she thought nothing of walking right up to me and sniffing around for food. When she realized that none was forthcoming (from me or any other tourist), she hightailed it up a tree and reluctantly began to chow down on a noni fruit, one of a capuchin monkey's nature-intended foods. A slightly bitter fruit, noni is part of the coffee family and is known as a natural remedy for stomach woes.

After a short rest and continued monkey-viewing, we headed back down the trail. The return trip was faster, since we already knew the path, and we walked the two miles with ease. Our stomachs grumbling, Vincent and I returned to the typical restaurant we had visited a few days previous, lunching on coconut chicken, rice and beans and sweet plantains once again.