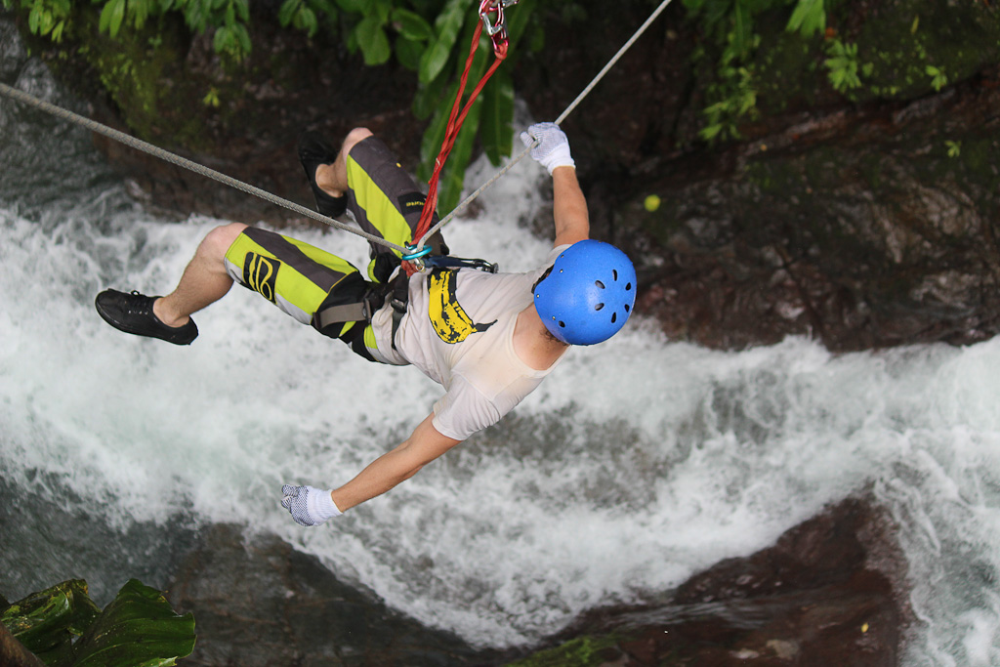 Some call it waterfall rappelling, and others call it canyoning -- I just call it intense.

I began the day by eating an amazing breakfast with seven complete strangers in the countryside. Quepos Canyoning had collected us from our hotels a half an hour earlier, and deposited us in the small town of Naranjito, on the outskirts of Quepos. Our guide, Anthony, gave us a tour of his unique operation while his wife prepared a delicious plate of fruit and omelets. After breakfast we piled into the back of a vehicle that looked suspiciously like a restored prison van.

After some jokes and a few photos, we found ourselves bumping along back roads to the waterfall. Within fifteen minutes, the van stopped. Our driver and guides cheerfully said, "welcome to the middle of nowhere." They added, "and that's according to the GPS." We got out of the van and took in our surroundings. All that could be heard were the sounds of the waterfall and hidden cicadas humming in the trees. We really were in the middle of nowhere.

Anthony led us to a trail, where we hiked single-file up a surprisingly steep hill. The wind carried bits of interesting conversation to my position toward the back of the line. Anthony informed us that the cicada lives underground 17 years before emerging -- and upon reaching the surface it has but 25 days to mate and reproduce before it dies. It's no wonder that these bugs scream all the time.

Before we knew it, the 90-foot Indian Waterfalls were upon us. We found ourselves at the top of an enormous precipice, looking at the water gushing underneath. One by one, Anthony hooked us into harnesses and strapped us to a complex system of ropes leading to the bottom. He instructed us to lean back and look up at the sky, with one hand at the top of the rope and the other near our tailbones. Then we should release our 'back brake' and jump like bunnies until we reached the pool below.

While the concept was simple, having real faith in the system was another story. Luckily, I was the designated photographer for the trip and was able to watch everyone else go first. When my turn finally rolled around, I had witnessed seven adventurers make it safely to the bottom.

I stepped onto the rock and could feel the water running through my toes. My first tentative bunny hop was fairly smooth, and landed me about a foot closer to the bottom. This wouldn't be so bad.

Anthony decided that it would be fun to drench me with a bucket of water as I descended. Although I could hardly see what was going on, I must admit the experience had become a lot more exciting.

When I finally reached the water below, I released the ropes and propelled myself off the rock face. Even though it had taken me twice as long as everyone else, splashing into the water was a proud moment.

With ropes and pulleys, we took turns climbing up to the top of the falls and plummeting down once more. One person came down smoothly, while others stumbled. Another flailed about pathetically. Of course there is one showoff in every crowd, and she catapulted down like a pro -- her record time was one minute and seven seconds. The whole experience was usually funny, sometimes frightening, and always a rush.

Dripping wet and high on adrenaline, we continued along a short path to the "monkey drop," a 45-foot free fall. A zip line cable connected to two trees took me, the first victim, over a freshwater pool. Incredibly afraid of heights, this was a big step. "Right hand on your head!" Anthony instructed. I fumbled around, momentarily forgetting which one was which. With the proper hand behind my head and the other on my harness, I suddenly dropped straight to the ground. A blood curdling scream escaped my lips as I splashed into the water below. Then I did it again.

After everyone had done the monkey drop two or three times, we were served warm sugar cane juice and cookies. The adrenaline would continue to pump through my veins for the next hour or so, until I returned to town. It was a rush to push my body to such physical limits, and overcoming my fear of heights made me feel powerful. I couldn't wait to do it again.