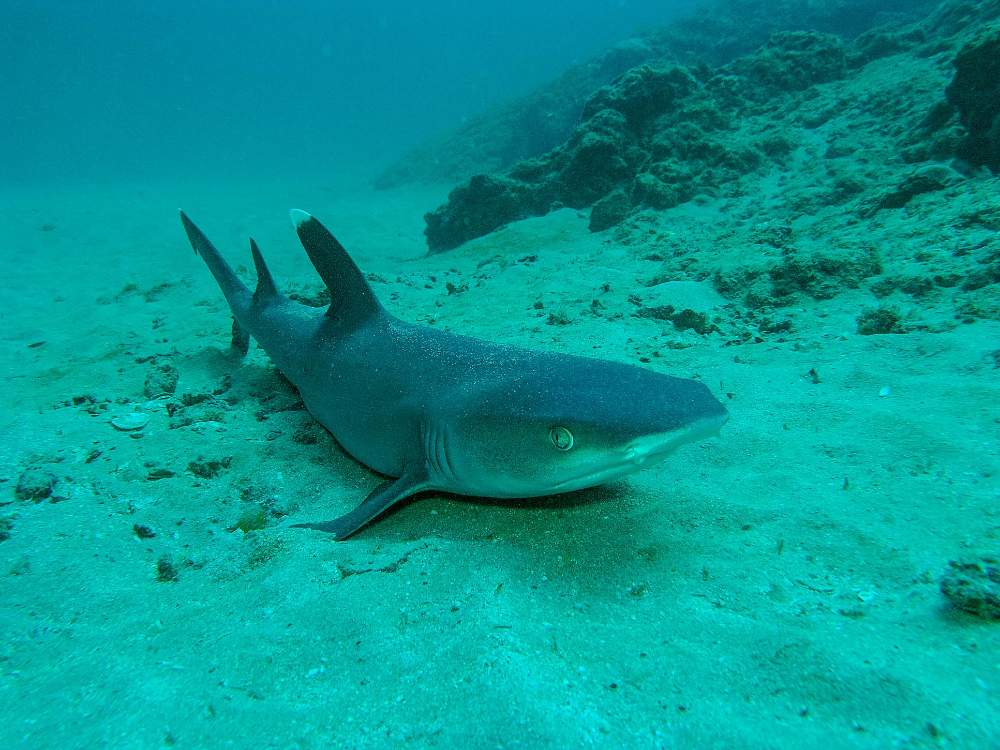 Day 7: Tigers in the Channel

Day 7: Tigers in the Channel

Days before the trip, Marcos told a wisecracking friend about the recent tiger shark sightings at Cocos Island.

"Are you kidding? I wouldn't stand a chance against a tiger shark in the water -- not even with a bayonet," Marcos said.

"No, man. You've got it all wrong," the friend told him. "You use the knife to skewer your dive buddy and then swim away -- let him deal with the shark!"

This twisted joke left me in stitches for about ten minutes. Using your partner as a decoy definitely violates the dive buddy bond of trust. Still laughing, I assured Maurizio I would never, ever sacrifice him as shark bait. "Well -- probably never," I corrected myself. "I guess it would really depend on how big the shark is."

This turned out to be a moot point because the "Forza Italiana" decided not to participate in the morning's dive. They had another round on the submarine planned.

Relatively new residents to Cocos Island, tiger sharks began to appear (or reappear) in mid 2008. There is some evidence that they were prevalent at Cocos as far back as the early 1900's, but they were gone by the time divers began exploring the island's waters in the 1970's. In fact, the creatures aren't even listed in the comprehensive Peces de la Isla del Coco Fishes species book, which is part of the reason why I didn't know much about them.

In retrospect, my lack of knowledge is probably the only thing that would have kept me from wetting my wetsuit. Second only to great whites in their reputation for attacking humans, tigers will eat just about anything -- including bicycle tires, garbage cans and rusty license plates. When two 12-foot behemoths decide to drop in on your first dive of the morning, ignorance is bliss.

There had been recent rumors of a tiger shark sighting in Manuelita Channel, just around the corner from the Sea Hunter, so we decided to try our luck there. Spiraling down to the bottom, we passed a fairly shallow thermocline that made the water fuzzy. The ocean was cold today, with decent visibility and neutral currents. Chances were ripe for a sighting.

Continuing along the underwater precipice, I quickly found myself distracted by butterfly fish and white tip reef sharks. After a few minutes I had completely forgotten what we were looking for. Time is a funny thing under the water. Two or three minutes can easily seem like a quarter of an hour. I glanced at my watch, expecting that at least 20 minutes had passed: in reality, it was only eight.

At the next curve in the seamount, Mau began shaking his maraca to grab our attention. Hovering a few feet above the ground and pointing emphatically with both hands, he reminded me of Wile E. Coyote in the path of an oncoming train.

The rest of the group was too far around the bend to see what was going on, so we remained in our places and waited for something to happen. A few seconds later Mau dive-bombed the nearest rock just as the nose of an epic tiger shark rounded the curve. My resuscitator fell out of my mouth as my jaw dropped open in awe. We stared dumbfounded as it passed us by, unable to look at anything other than its dark vertical stripes and formidable jaw.

My heart was racing, but more out of excitement than fear. The creature's sheer size and beauty was so stunning that I was hardly able to move, and it took a bit of fumbling to actually point my camera and press "record." I erred on the side of safety and made a movie, which does not require a flash. Although there is no evidence that flash photography can incite a shark attack, there wasn't a chance in hell that I was going to risk spooking the leviathan with sudden movements.

Once the shark had disappeared over the next cliff, there was a long pause of collective disbelief. Suddenly we all looked at each other with expressions that read "HOLY COW! Did that really just happen?" Everyone mimed high fives and "OK" signs before continuing the dive uneventfully.

Uneventfully, that is, until another tiger shark materialized from the opposite direction. Had the first fish already made a circle around the rock? No -- this one appeared slightly smaller, and it seemed highly unlikely that the shark could have made the loop that quickly. Yesterday's prediction that we would see two of these beasts was eerily accurate. It vanished behind a massive boulder above us almost as quickly as it appeared. Back on the skiff, Marcos asked with wide eyes, "Were you scared? Because I was really, really scared." Truth be told, I wasn't any more scared than when diving with scalloped hammerhead or Galapagos sharks. Being in the water with any animal 10 times my size certainly gets my adrenaline pumping, but 'scared' is not the right adjective to describe it. Shark attacks are extremely rare worldwide. Elephants, alligators and tornados kill more people each year than sharks do.

Mau added, "While it is highly improbable that they will attack [particularly with no bait in the water] you just never know with wild animals. Tiger sharks have the same unpredictable instincts as tigers living on land." I was enthralled by this element of danger. The experience just became a lot more intense -- and I couldn't wait to do it again.

A shark diver was born.

Day 7: Tigers in the Channel in Pictures