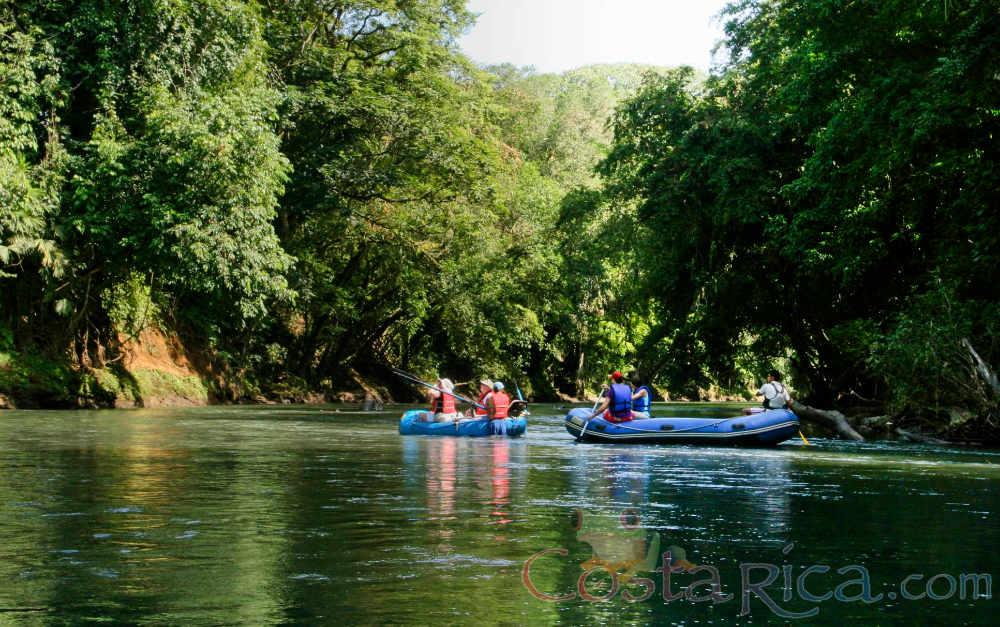 Day 7: Ending With a Safari Float

Day 7: Ending With a Safari Float

I awoke to the seventh sunny day this week. I could hardly believe my luck -- we were well into 2009's rainy season, but the sky had been mostly blue, save for the occasional puffy, white cloud and the constant smoke emitted by Arenal Volcano. The smattering of clouds would serve as the ideal cover for a safari float, neither blocking out the sun nor letting the day get too hot.

The bus arrived at 7:50 a.m., and I greeted five other passengers. Today was to be a relaxing day, full of wildlife watching on the Penas Blancas River. Penas Blancas means "white rocks," and, though the river's rocks are not quite white, they are sun-bleached enough to deserve the name.

The drive from La Fortuna took only 25 minutes. We parked alongside the river, and our guides took ten minutes to prepare the rafts. These were the same rafts used for whitewater rafting, save for a seat and permanent oar rings for the guide. However, instead of sitting on the sides of the raft, as I had learned to do for Class III rapids, we were allowed to sit inside, on the inflatable seats. I was psyched; sitting on an inflatable, rounded seat makes me feel much more balanced and safe than hanging on the edge, clinging to the raft by my toes. (Although, I must admit, the precarious seating position makes whitewater rafting just that much more thrilling.)

I was happily perched in the center of the raft, camera primed and ready for action. Raul, our guide, asked us what we wanted to see today. Birds, monkeys, sloths and crocodiles, we ticked off, one by one. By now, you probably know I wasn't the one who said crocodile. In fact, I may have glared at the person who did. But since our guide was resolved to spot one for us, I asked if they ever attack. I was hoping for a little reassurance. "Oh yes," he said sagely, "people get attacked every year." A look of terror may have crossed my face (hey, this was an inflatable raft, very susceptible to blunt impact, say, for example, sharp crocodile teeth?), and he added that he had never known anyone to get attacked on the Penas Blancas River. This relaxed me quite a bit, but I resolved to keep my legs and arms inside the raft at all times.

As we set off on the river, Raul expertly guided us toward the river bank. Almost immediately, we saw a green iguana and an emerald basilisk lizard, also known as the Jesus Christ lizard because of its ability to run on the surface of the water. They sat sunning themselves, and appeared to be unfazed by our presence. Raul explained that reptiles generally have very good camouflage, and so they prefer to stay absolutely still, relying on their invisibility as protection from would-be predators.

Next on our must-see list: a sloth. Camouflaged as a small, gray ball, a three-toed sloth slept in a guarumo tree above. The guarumo tree is one of the sloth's favorite sources of food, and because of its sparse foliage, it is the go-to tree for spotting the animals. Though sloths are often called lazy, they really aren't -- their slowness is due to the fact that they eat mostly low-calorie leaves, which can take almost 48 hours to digest and pass through their four stomachs. Additionally, the guarumo leaf is highly alkaline, and produces a drowsy, drunk effect to those who ingest it.

As we drifted down the river, we saw many iguanas and basilisk lizards. In fact, they seemed to dot the river banks, sunning themselves in the day's warmth. I hoped that one of the basilisks would break out into a run across the river, but it was not to be. We did, however, provoke several into running the other way. When spooked, the basilisk is capable of moving its small body at break-neck speed, and it is easy to understand how its speed and light weight propel it over the water just quick enough to "walk on water."

Raul next pulled us over to the river bank. Speaking in a soft voice, he pointed upward into the trees. There, we saw a small bat family sleeping. Raul explained that, though not aggressive, the bats could attack if spooked, so we kept our voices down. Furthermore, he explained, these bats sleep in a vertical row as protection -- their coloration is similar to the fer-de-lance, Costa Rica's most dangerous snake, and when they sleep in a row, they resemble the venomous creature.

Across the river, we heard the distinctive rustle of monkeys in the trees. We quickly rowed over, and were rewarded by a small family of howler monkeys not high above us. Startled, they began to defend their territory in their typical way: by peeing. Unfortunately for us, our raft was situated perfectly below the howler rumps, and a trickle of yellow liquid splashed onto the raft. Quickly, I washed it off with river water -- if you've never smelled monkey urine before, suffice it to say that it's not anything you'd make into a perfume.

Propelling ourselves down the river, we saw many different birds: a cormorant, king fisher, gray hawk, vulture, clay-colored robin (Costa Rica's national bird), social flycatcher, keel-billed toucan, and aracari (toucanette) were out in force. My favorite, the keel-billed toucan, showed itself twice today. They are the second-largest toucan in Costa Rica, and also the most brilliantly-colored. Though their beak only weighs a few ounces, in comparison to the toucan's body, it is a heavy appendage, making flying difficult. Therefore, toucans often fly and glide, flapping their wings to fly vertically and gliding over distances.

When Raul told us we were just two minutes' from the end of our safari float, the group grew a little anxious; we had already seen birds, monkeys and sloths. Where were the crocodiles? Suddenly, Raul whispered to look to our left. There, floating not eight feet away, was a small crocodile. About six feet long, he floated in the middle of the river, camouflaged against driftwood. His baleful eyes looked out at us, a nervous expression on his face. Though I realized that he could rip me apart in a second, I felt compassion for the creature; we had disturbed his resting place, and had scared him. Within seconds, he had drifted underwater, hiding from what he deemed to be a dangerous predator.

Just a few feet away from the timid croc, we banked the boats and climbed a hill. A typical Costa Rican home was the last stop on our trip, and we spent a few minutes enjoying fresh pineapple juice, yucca cake, fried plantains and fresh palmito, or string cheese. It was a delicious end to the morning, and our group headed back to La Fortuna sated, happy and satisfied with the morning's wildlife viewing. Tomorrow, I would go home, but tonight I would read and enjoy the view from my volcano-front suite at Magic Mountain.

Day 7: Ending With a Safari Float in Pictures