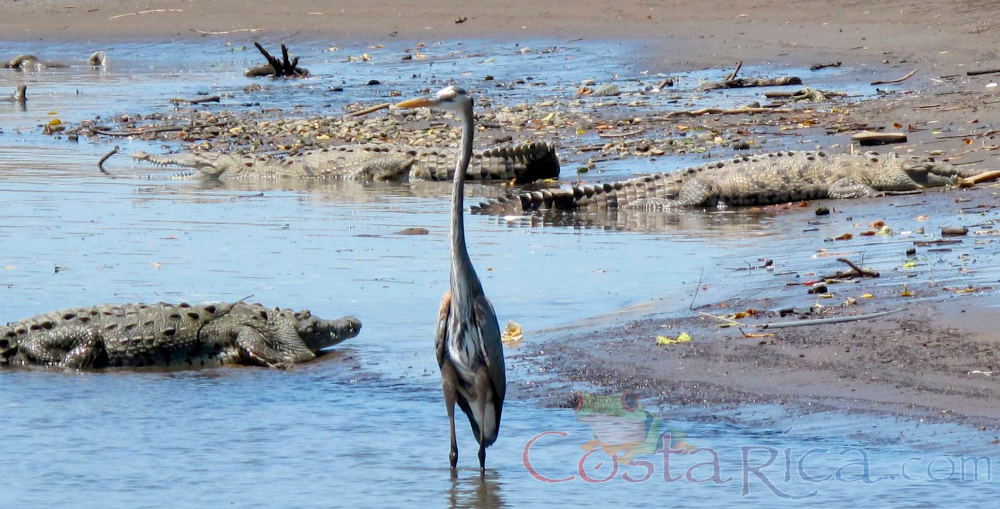 Something big shuffled across the path just a few yards in front of me. The animal walked unhurriedly, and somewhat resembled a coatimundi in both behavior and stature. However, its light color and black stripe just didn't fit the bill. I motioned for my guide, Roy Arroyo with JD Watersports, just as he was rounding the bend. The crunching of leaves underfoot spooked the creature, but Roy had time to identify the mystery being as an anteater. And by the looks of its clean white fur, it was a very young one at that.

I was lucky indeed to see an anteater in Carara National Park, a reserve famous not for its mammals but for its incredible scarlet macaw population. The zone was originally part of the privately owned Hacienda Coyolar, a ranch that stretched from Orotina to Herradura. In 1978 the owner passed away, bestowing a large sect of land for a biological reserve dedicated to scientific research. It wasn't until 1998 -- in response to Jaco's booming tourism industry -- that the park opened its doors to everyday visitors.

Bordering Guanacaste's dry Pacific forest and situated just a mile from the wet rainforest of the Tarcoles River, Carara National Park is a perfect example of a transitional forest. Every few yards along the trail, Roy would stop and burst out a birdcall. My favorite was for the red bill pigeon, whose song is onomatopoeia: a word that imitates the sound that it describes, like zap, quack or cock-a-doodle-doo. (This tongue twisting word had been buried within the dark recesses of my mind since high school.) Red bill pigeons cry the phrase, "Dos tontos son!" which means, "They are two fools!"

While the trails at Carara are technically considered hikes, their short distance and flat terrain felt more like long strolls. I was observing plenty of wildlife, so whether or not the trek was physically challenging didn't really matter. Around a corner, we spotted a group of elegant white ibis, and then two pairs of tiger butterflies in the throes of mating. Roy picked up a large golden back ant with his handkerchief, put it down and showed me the pungent acid that it sprayed on the cloth.

After a while we came upon a bridge that marks the halfway point, where Roy pointed out a Muscovy duck. "Look at that sexy walk!" he said, "and the way she swings her tush back and forth." I had never before thought of birds as having sex appeal, but I conceded his point. That duck really knew how to strut her stuff.

Eventually the loop trail led us back to the parking lot. We drove fifteen minutes to the Crocodile Safari Tour's take-off point, and boarded a covered boat that took us through the mangrove estuaries of the Tarcoles River. Throughout the trip we were surrounded by plant life and animals like crabs, tiger herons and -- the main attraction -- enormous American crocodiles.

For a place with 63 crocs per square mile, most of them were hiding today. Roy attributed this to the time of day and low tide. What struck me the most about the Crocodile Safari was the congregation of everyday brown pelicans at the estuary. They were downright enormous, and looked like something right out of the dinosaur age. We could not take our eyes off them as they preened and hunted for fish.

Gliding through the swamp, Roy explained several fascinating tidbits about this environment. Mangrove roots have the capacity to hold onto the sediment in which they are planted, in a sense creating their own habitat. When the tide rises, heavier salt water sinks to the bottom of the river where the roots then absorb the mineral. These plants provide a crucial habitat for some 50 species of birds, including ospreys, snowy egrets and mangrove wrens. One of my favorites was the rosey spoonbill with its light pink feathers.

Two hours on the boat flew by as Roy gave us a crash course on the area's avian and reptile species. Finally, we pulled up to the dock where we snacked on fresh fruit before returning to the beach. On the drive home I marveled at the amazing biodiversity that existed in an area as moderrn and developed as Jaco.