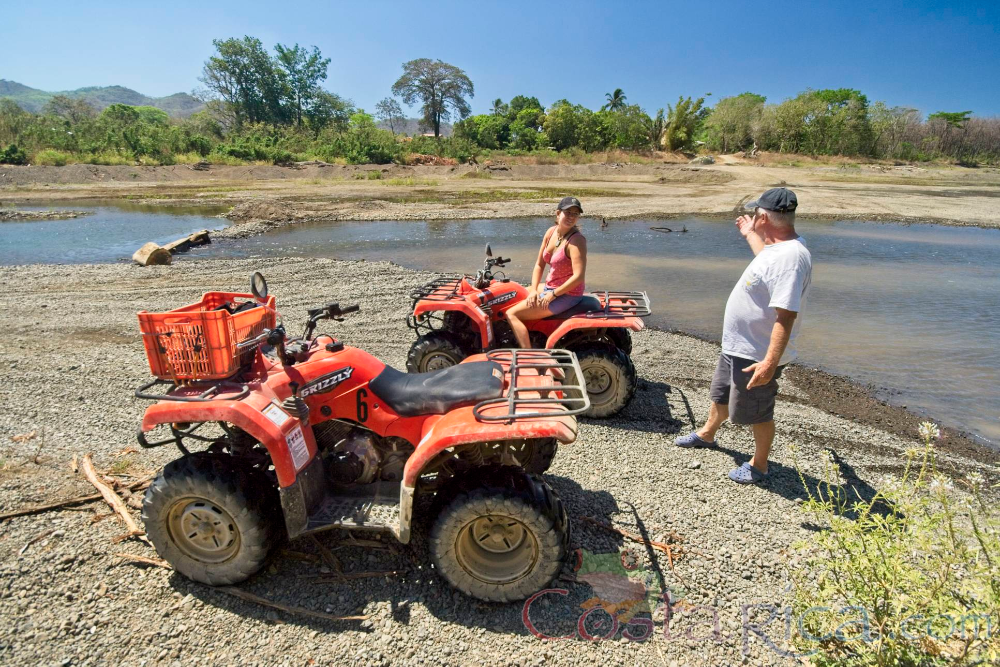 We met Gunter, a German turned Costa Rican citizen, at the Gilded Iguana Bar and Restaurant at 9:00 a.m. for our ATV adventure. I have to admit, I was disappointed to discover that he only had two ATV's, meaning I would ride on the back of his as a passenger. Luckily, after 15 minutes, Vincent couldn't handle the overwhelming dust in his eyes, and handed me the keys to his vehicle.

I had lost my sunglasses the previous day, and following the guide's four-wheeler meant squinting and literally eating his dust. Fortunately, the adventure was so much fun that the discomfort was barely noticeable. Our quads breezed through trickling rivers and rough back roads- over Nosara's hanging bridge, and then up to the town of Pilas Blancas and its one-room schoolhouse.

Schoolchildren heard us approach and exited the building to put on a circus act. They tried hard to entertain the foreigners, prancing about and performing silly tricks. The path Gunter wanted us to take was blocked, so we were forced to go back the way we had come. A short time later we encountered some howler monkeys, and I found out what a funny guy Gunter is. "Look at how beautiful that monkey is," I said. "Look at those big white balls!" he contrasted in his thick German accent.

To finish off the tour, Gunter took us to his favorite pub called the Black Sheep. While technically a members-only club, becoming an affiliate is as easy as making a phone call. Two friendly Americans run the operation more or less out of their private home: Joe and Helena. Albeit more European than Costa Rican, this "extension of the living room," was an incredible place.

During a trip to Europe this past fall, I had tasted a sweet, carbonated beer called a raspberry Hoegaarden in Ghent, Belgium. I had difficulty finding it in neighboring countries such as Holland. To my surprise, there it was at the Black Sheep: icy cold and waiting for me. I vowed to return with my beer enthusiast friends.

On the way home I stopped at the Frog Pad Internet Cafe. Here, I spent my lunch break rifling through their collection of used books in English. The DVD stacks were for rent only, and even more impressive in size and scope -- including brand new releases and shows like Lost, Californication, and Dexter. Luckily, I didn't have to drag my selections very far -- our hotel, Villas Tortuga, was right next door. Their guest rooms were homey with an original decor, my favorite accent being the indoor surfboard rack. I took a steamy hot shower and prepared for Anasura yoga at 3:00 p.m.

I have never tried this style of practice before, and was looking forward to it immensely. Jane Fryer, the same teacher I had the other night, taught the class. Thankfully, this class was not to rejuvenate, but to work. There were not as many flowing sun salutation sequences or repetitions as in Vinyasa or Ashtanga types.

Nonetheless, we found ourselves sweating just as much if not more. Jane was lighthearted with an entertaining sense of humor, and toward the end she allowed us a few moments to choose any poses our bodies might be craving. I chose a handstand, and she gave me a few helpful tips on how to perform the inversion.

After yoga and a quick shower, we stopped by the Casa Luz store to check out their jewelry show. I loved the beautiful gold pieces created by one of the local artists. She used only the finest materials, including a variety of gemstones, pearls, and seashells. We browsed her graceful pieces and then went to have some dinner.

Next door, Jungle Joe's band The Medicine Show was just beginning to warm up. Specializing in rock n' roll covers by the Rolling Stones, the Grateful Dead, Cream, and even Sublime, The Medicine Show put on a fantastic performance and drew a large crowd. Their enthusiasm was infectious, and within minutes they had the entire restaurant's undivided attention. As we listened to hits like "White Room" and "On the Cover of the Rolling Stone," it became obvious that each and every member of the group lived to be on stage -- intoxicated by the joy and excitement from the crowd. Upon my request, Joe played Sublime's "What I got," after which I returned to our hotel to get some sleep.

Day 4: Quad Tour and the Black Sheep Pub in Pictures