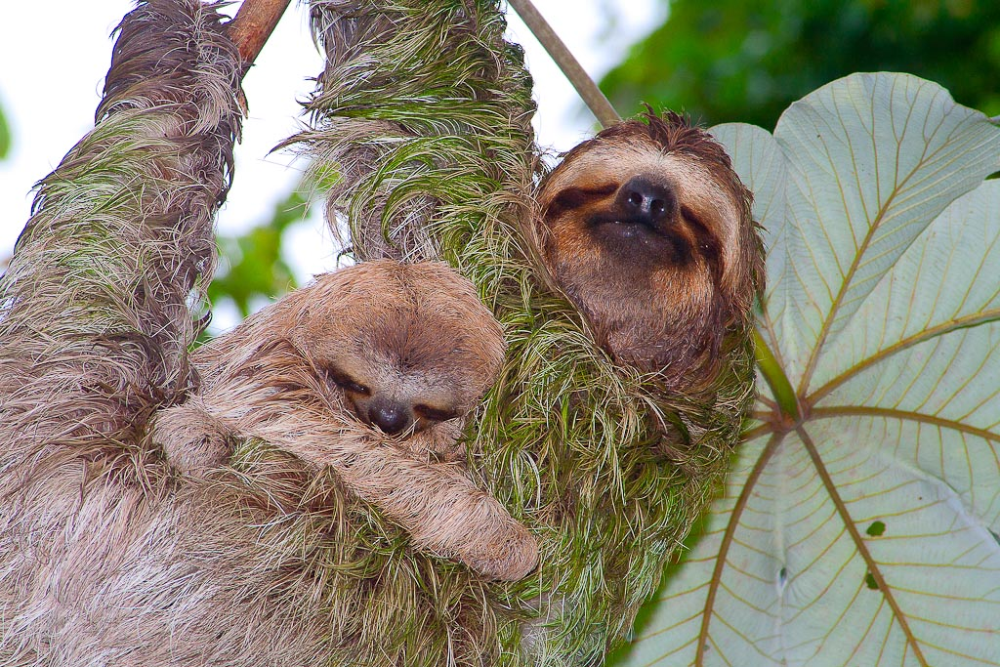 Nothing starts the day off better than gallo pinto (seasoned rice and beans), possibly my favorite Costa Rican dish. Accompanied by a strong cup of coffee, I savored my breakfast at La Colina's poolside restaurant while chatting with a few other guests. Cameras in hand, Vincent and I then joined local eco-tour operator, Ave Natura. We were bound for Manuel Antonio National Park. Our naturalist guide, Eric, toted a large telescope to help spot the myriad of wildlife that inhabits the area.

Second only to Poas Volcano in terms of visitors, Manuel Antonio National Park attracts over 160,000 people each year, all drawn to its wide beaches and troops of monkeys that frequent the area. The park consists of mangrove swamps, primary rainforests and marshy woodlands and is bordered by the clear waters of the Pacific Ocean. It is a haven for over 100 mammal species including the highly endangered squirrel monkey, or mono titi.

En route to Manuel Antonio, our driver spotted a mother three-toed sloth and her baby, high in a cecropia tree. Algae tinted her fur a mossy green, the perfect camouflage for a tree-dwelling creature. This was my first glimpse of a baby sloth in the wild, and its sweet face seemed to smile back at me.

Due to the rising tide, we crossed a small river outflow via water taxi to enter the park. Others opted to hop across rocks at a shallower point near the sea. The park contains three stretches of beautiful beaches, each shaded by enormous coconut palms and almond trees. The shores are occasional nesting grounds for Olive Ridley and Pacific green turtles.

Eric pointed out howler monkeys, long-nosed bats, spiny iguanas and a basilisk lizard on our tour. We followed the coastal trail to Punta Catedral, a rocky land bridge that juts into the sea. A large troop of curious white-faced monkeys, or capuchins, climbed down from the tree tops and scampered along the shore. They moved in a single file, foraging for leaves and fruit with tiny, dextrous hands, and seemed oblivious to our presence. One of the most intelligent primates, white-faced monkeys have been observed rubbing leaves on their bodies as a natural insect repellent.

A lone, white-nosed coatimundi joined us along the path, rooting for insects and crabs with his sensitive snout. His reddish-brown, pointy tail held high told other male coatis that this was his turf. We followed our guide up a hill overlooking "La Trampa", an ancient trap made by the Quepoa Indians many years before. The indigenous tribe had strategically placed rocks along the shore to snare fish, turtles and crabs at low tide.

Typical for a summer day, the clouds rolled in, bringing with them a quick downpour. Unfazed by the soaking, we trudged onwards and spotted a female tropical night lizard, which according to our guide, could clone itself without the aid of a male. Although the endangered squirrel monkeys eluded us that day, the sloths and white-faced monkeys were definite highlights.

After a quick lunch in Quepos, we again joined Eric and Ave Natura for an afternoon boat ride to nearby Damas Island. Famous for its lush mangrove estuaries and peaceful environment, Damas is home to crocodiles, caimans, monkeys, raccoons and a variety of waterfowl.

We trolled through narrow canals edged by red and black mangroves and tall African palms. The island was formed by river sediment deposits trapped by the mangrove's pioneering roots over thousands of years. Damas Island, home to a mere 30 families, appeared to be a sleepy backwater community and reminded me of the estuaries native to my hometown in South Carolina.

With our boat captain Andres' help, Eric spotted a four-foot crocodile hidden in the mangrove roots. Green kingfishers plunged into the brackish water in search of a meal while cicadas hummed all around us. A basilisk lizard ran across the surface of the water just in front of our boat, clearly worthy of its nickname, the Jesus Christ lizard.

Eric identified white ibis, a yellow-crowned night heron and several snowy egrets along the shores. A troop of white-faced monkeys jumped in the trees, and Vincent caught a glimpse of a raccoon. Our boat ride was so peaceful and quiet, and I was glad that Damas was a protected area and would not be developed.

We thanked our Ave Natura guide for a great day of sightseeing and wildlife encounters. Vincent and I returned to La Colina to freshen up before dinner. But first I wanted a dip in the hotel's pool. I had the water all to myself, not surprising as the hotel only has 13 rooms, and most visitors were still at the beach. I love traveling in the wet season (May through November) as there are fewer crowds, wide open beaches and competitive hotel rates.

I lounged at the pool's swim-up bar before heading in for a quick change. Vincent and I tried a new tapas bar, my ultimate fantasy in a restaurant as you can sample a little bit of everything. It's like being able to wander among the tables, trying a bite from each plate (but where nobody gets mad at you for sticking a fork in their grilled shrimp). Food also seems to taste better and fresher when you're at the beach. Satiated by food, drink and two wonderful tours, and with a big day ahead of us, we returned to the sanctuary of our rooms at Hotel La Colina.