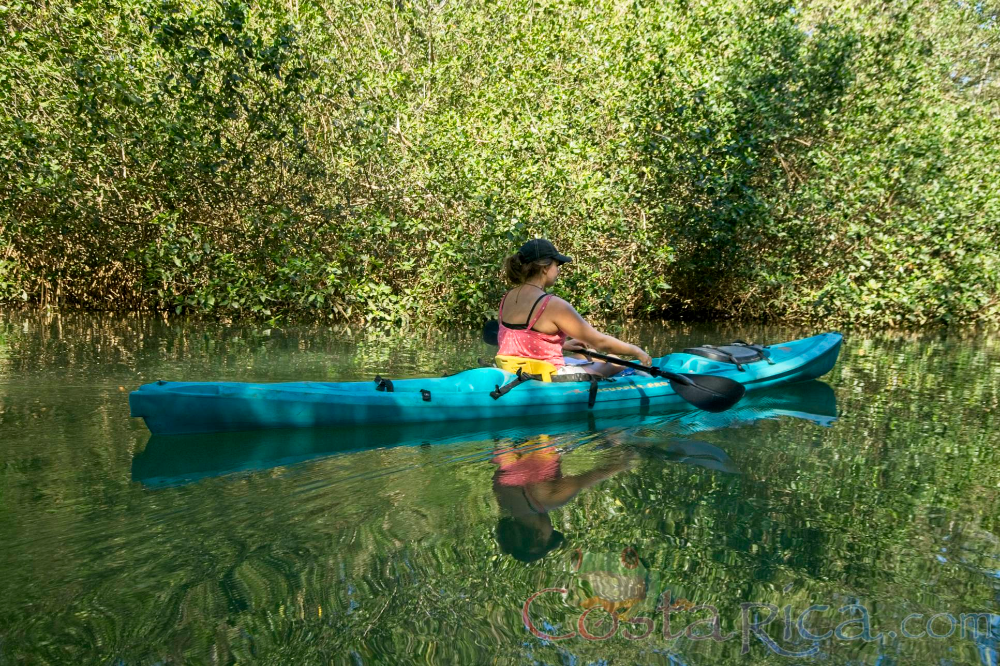 Rubbing the sleep out of my eyes, it took a few moments to remember that I was not in my bed in Liberia, but in a comfortable bed at Villas Tortuga. Remembering what was on the agenda for today, I jumped up and was out the door in 15 minutes flat. In my haste, I had put on a pair of white shorts -- brilliant attire for a wet day on a boat.

First on the list was a kayak tour up the Montana River. We were to meet our guide, Jungle Joe, at a bar/restaurant called the Gilded Iguana. Joe could be a comedian, and he had me nearly rolling on the floor laughing before we even left the parking lot. For the third time in three days, Vincent and I returned to La Boca, near the Nosara Biological Reserve. Unloading the boats, Joe pointed out smooth red pebbles that were different than the other rocks on the dark beach.

He informed us that they weren't stones at all, but pre-Columbian artifacts more than 14,000 years old. These were shards of pottery from ancient tribes, perhaps the Chorotega, who used to inhabit this shore. Mother earth provided them with ample fish from the sea, limitless freshwater from the rivers, and cool jungle for shade. I had never knowingly handled a relic that old; it felt mysterious and powerful.

With smiles on our faces, we continued paddling. Our guide shared interesting facts along the way, while pointing out snowy egrets, and white egrets, mahoe flowers, and trogons. The mangrove trees that these creatures were perched upon can metabolize salt water. They also have no rings to distinguish their age, because the species grows year-round with no dormant season.

Finally, we reached our destination: the black sand Playa Nosara. Barefoot, we walked along the shore. Vincent laughed as I skipped around like a Mexican jumping bean on the red-hot sand to which he was completely unaffected. I told him that he must have hooves for feet to not feel the burn. Joe pointed out nests of disintegrating turtle eggs before returning to the boat, where an enormous tiger heron soared a few feet above the water. Once it landed, we paused to watch it feed. The heron was so motionless that we might have thought time had frozen still had it not been for the bright yellow butterflies dancing along the water.

On our way back to the river mouth, we came across another majestic bird, a common black hawk. The predator was creepy, and showed no fear of humans. It could have easily gauged my eyes out had it wanted, and by the looks of it all it needed was the chance. I was relieved when it flew off. Farther down the river we saw a beautiful blue Louisiana heron, and a group of snowy herons.

Next stop: the massage house at Playa Guiones. Ironically, the best massages in town are also the cheapest. The salon was built to give guests a true Costa Rican experience, while maintaining a socially responsible establishment that helps Nosara's economy. All the female therapists are Costa Rican, or Tica, and also company partners. The typical rancho-style architecture is gorgeous, with high ceilings and cool rooms. Entrepreneur Richard Jordan explained that the salon doesn't spare any expenses.

The massage was one of the best I have ever had. It began with a hot towel soaked in rosemary placed on my back. Then, the masseuse began to work her magic. All muscles that she touched simply melted. I can't describe her techniques very well, because at this point my memory gets a bit fuzzy. I drifted into a semi-dream state, as she applied perfect pressure, working my back, shoulders, and legs. Every now and then she chanted something soothing under her breath that I couldn't understand. It was the fastest hour of my life, and at the end she misted my face with cool water and silently left the room. Even though I speak Spanish, she hadn't said a single word to me the entire hour. Normally this would feel strange, but I was so relaxed I didn't have a care in the world.

As if the day weren't soothing enough, I had a 1:00 acupuncture appointment, also in the town of Guiones. Zachari was one of the most caring therapists that I have visited concerning my back problems. Extremely knowledgeable when it comes to Chinese medicine, I had no qualms about letting him poke me with needles. He noted that my psoas, "literally and physically the deepest muscle in the body," might very well be the culprit causing lower back pain. My ailment is not uncommon, Zachari said; stress and negativity tend to build up and fossilize in the psoas muscle, bringing pain and stiffness. "It is more or less the emotional garbage can of the human condition," he stated with a laugh.

His treatment called for a distal, or far away from the area of discomfort, placement of the hollow needles. Also recommended was a trial diet to see if I have any food allergies. I would have to cut out wheat, dairy, and sugar for two weeks and slowly reintegrate them into my diet, assessing my health along the way.

Vowing to attempt this experiment was easy; actually following through will be onerous if not impossible. He placed the needles, which did not feel sharp upon insertion. I felt a dull ache at the entry points, and a general floaty sensation after about 15 minutes. Zachari placed a metallic button attached to a sticker on the inside of my outer ear, in a space that directly corresponds with my lower lumbar.

On the way out, he patiently answered two of my questions about acupuncture. 1) Does the energy in the body go around the needles, like water around a metal pipe in its path? No, it is more like an electrical current that conducts the energy, helping to pull it along its natural path. 2) Do body piercing (lip, eye, nose, belly) effect how the energy runs through your body? Nobody really knows, and it might depend on where on the body the piercing is located. One of his teachers said yes, others said no.

Day 3: Jungle Joe, a Tica Massage, and Acupunture in Pictures