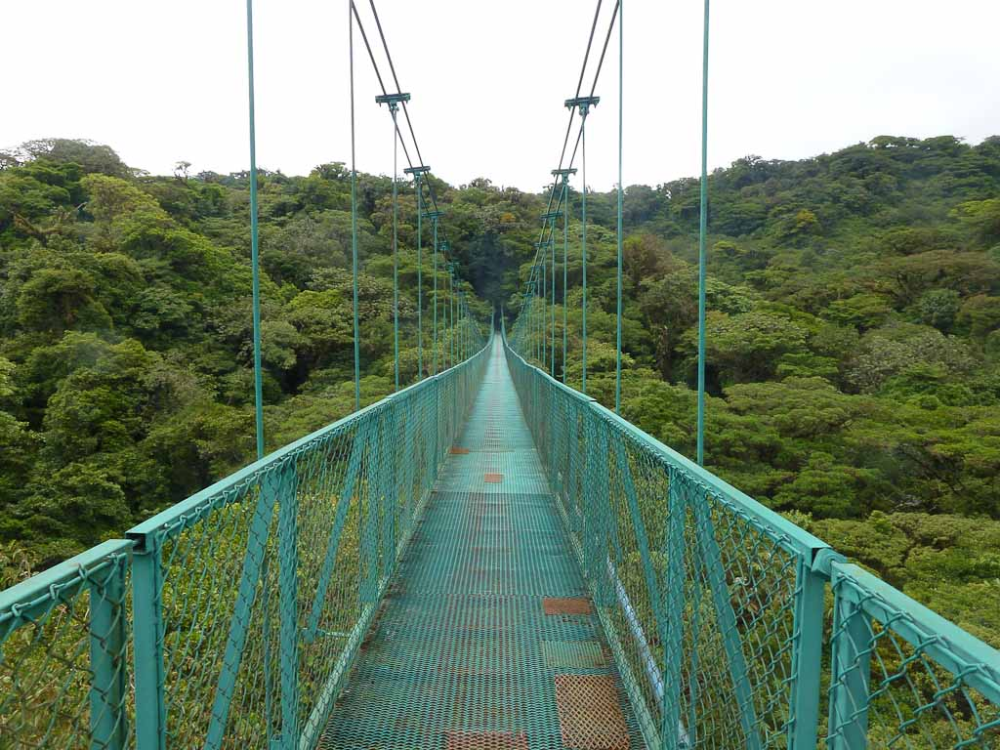 Setting aside my nervous excitement, I opened my book and tried to absorb the words on the page. I was waiting for a Grayline shuttle bus to arrive and whisk me away to Monteverde, one of my favorite places in Costa Rica.

My previous visit of two days had been far too short to properly experience the area's amazing views and varied activities. I was ready for round two. At 8:05 sharp, the shuttle representative walked into the hotel and ushered me toward the waiting van, where my photographer, Mallory, was already seated.

After a quick hello, Mallory and I reviewed our schedule for the next few days. Monteverde and Santa Elena, two small towns separated by only a few miles, brim with extreme adventures, moss-covered forests, exciting nature hikes and inquisitive wildlife. Over the next eight days, we planned night walks, day hikes, canopy tours, hanging bridges and plenty of wildlife watching.

I watched the highway signs count down our arrival and, less than three hours after pickup, we were just 15 miles from our final destination. Mistakenly, I thought we were almost there, but the van lurched onto a gravel road, instantly slowing to 20 mph. With a smile I remembered the famously potholed ascent to Monteverde, both the bane and savior of travelers to this remote region. Though the road is slow-going and sometimes suitable only for 4WD vehicles, its unpaved status has helped Monteverde retain a small-town charm.

Little more than an hour later, the gravel turned into asphalt once again, and we were in Santa Elena and our quaint hotel. Mallory and I dropped off our bags and headed out in search of lunch. The dirt-and-rock road was steep, but the promise of food fueled us onward. At the top of the dusty hill, we saw a small pizzeria set back from the road, and made a beeline toward the cheesy scents wafting from within.

Two sodas and a supreme pizza later, we were ready for our first Monteverde adventure. The Butterfly Garden, located less than two miles from downtown Santa Elena, seemed to exist in another world: dirt roads and tree-lined paths led us into a cool, quiet slice of paradise. The rustic building leaned over the cliff side, and a rolling valley stretched out below, drawing my gaze out to the Pacific Ocean and the scenic Gulf of Nicoya.

A voice drew me from my reverie; a volunteer was welcoming us to the Butterfly Garden and sending us down to the first garden, where the tour had just begun. Our guide wore an orange knitted cap (ostensibly to attract butterflies), and his enthusiasm was evident. He handed everyone a small butterfly-filled bucket, and told us where we would release our specimens: I was to wait until the fourth garden.

The first garden, our starting point, was filled with blue morpho butterflies. Their iridescent forms flitted about, occasionally landing on our clothes. The guide informed us that, despite what our eyes might interpret, morphos are not actually blue in color. In fact, their wings are covered in small scales that reflect natural light, appearing blue to our eyes. In other lights, they may reflect other hues.

The second garden represented the forest canopy, full of light and brightly colored butterflies. As in many species, bright oranges and reds indicate to predators that the insect is noxious. In this case, if a bird were to eat one of these butterflies, it would become violently ill and forever associate those markings with poison.

Passing into the third garden, I noted the temperature change. The cool, humid greenhouse represented the jungle floor, and little light was visible through the black netting. Glass-winged butterflies were all around us, though hard to spot because of their transparent wings. We learned that these butterflies are also poisonous, and that if they are under attack, they will deliberately fly into a spider's web. The spider, knowing that the insect is inedible, will work to set the butterfly free.

Rounding out the hour-long tour, we entered the fourth garden, a towering, netted area that represented Monteverde's natural habitat. Opening our containers, we found docile monarch butterflies and coaxed them out onto our fingers. Unlike North American monarchs, these butterflies never migrate because Costa Rica's climate is always hospitable. My butterfly, whose black body was beautifully spotted white, sat on my finger for just a moment before flying away.

After falling in love with the butterflies, our group moved on to less lovable insects. Our first stop was at a leaf cutter ant exhibit, where we learned that each colony houses up to 10 million ants, all female. The queen, hidden in the colony's heart, is approximately two inches long and 1/2 inch thick. Her pheromones guide the entire colony; if she were to die, her soldiers and workers would not even know when to eat.

Our final destination was the arachnid and insect room. Two golden silk orb-weaver spiders spun their webs in the rafters, waiting for their next meal. In front of us, two large tarantulas relaxed in their cages. One female has been at the center for more than three years, and we were encouraged to hold her. With more than a little trepidation and lots of encouragement, I stuck my hand out to hold her; she was surprisingly light, and her legs were silken.

The center was also home to black scorpions -- scary looking but relatively harmless -- as well as centipedes, millipedes, myriad cockroaches and other creatures which one may or may not want to touch. I refrained, though several of the guided group elected to pet the millipedes, which give off a minute cyanide residue, or the cockroaches, which our guide described as nature's little composters. Before I knew it, our time at the Butterfly Garden had come to an end, and we called a taxi to take us back to Santa Elena.

After our lunchtime pizza, we weren't hungry for dinner, so Mallory and I went back to our hotel, grabbed some sweatshirts, and walked downtown for a nighttime ice cream, a Monteverde specialty. At 6:45, a small van picked us up, and we were on our way to a night hike at the Monteverde Cloud Forest Reserve. About thirty minutes later, our driver excitedly pulled over and we tumbled out onto the road, our gazed directed upward. Two three-toed sloths were in the trees above us, and we watched their furry bodies lazily make their way to a new, food-filled tree.

Another five minutes, and the van arrived at the reserve; we were ready for the night hike. Our tour began with a short video introduction to the private park, and then we divided into two groups. We set out to practice with our flashlights, scanning the trees for the telltale red glow of mammal eyes. Climbing up stone stairs, we came to an American scientist working on bat research, and soon after encountered an olingo, cousin to the smaller kinkajou.

Next, we headed into the reserve, where well-groomed trails helped minimize nocturnal fumbles. It was difficult to spot any mammals, which all seemed to be hiding, but we did catch sight of several insects, including walking sticks, katydids and crickets. Straggling behind, both Mallory and I gasped at once; a snake was slithering through the bushes no more than 15 feet from us. Calling our guide back, we were told that it was non-venomous, though difficult to identify because it was so far away.

Moving on, we made our way through the damp forest. Though it always sounded as if it were raining, the dense canopy protected us from everything but the mildest mist. As the tour wound down and we prepared to head back to the parking lot, our guide spotted a pygmy tree frog, one of the area's most prevalent species. The tiny, green frog looked at us from its leafy perch, bravely gazing into the inquisitive faces of animals hundreds of times its size. Pictures taken, we left her in peace.

Less than an hour after our romp in the jungle, Mallory and I were back at the hotel. Bidding each other good night, we headed to our rooms and collapsed. It had been a long and exciting day, and we had to rest up for tomorrow's adventures.