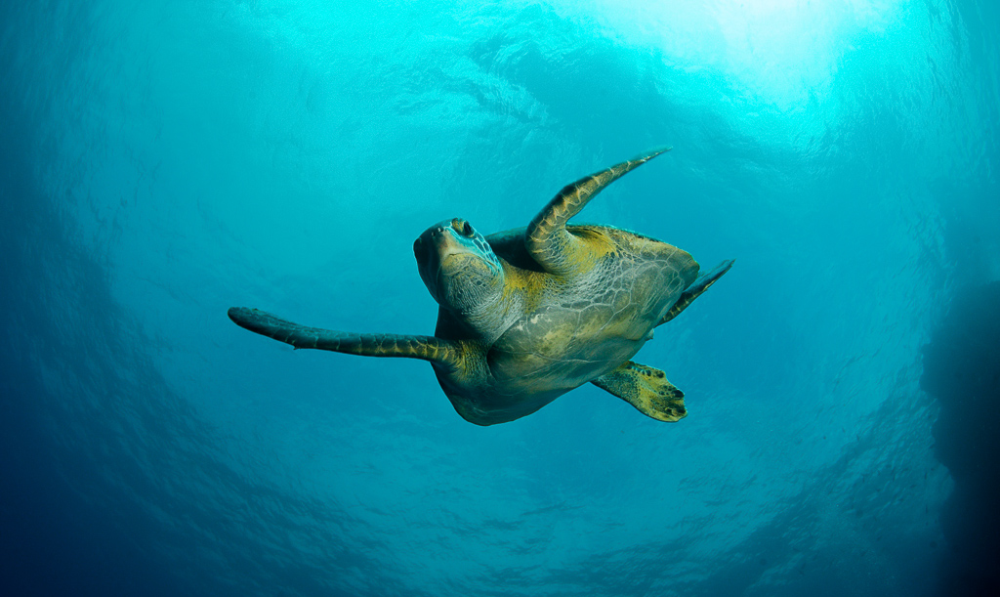 Perhaps the most difficult aspect of diving is maintaining enough self control as to not become ridiculously excited when seeing something extraordinary. Not permitting your heart rate to rise or your breath to quicken is a challenge, to say the least.

With this end in mind, I hovered just above the sea bottom in Playa del Coco, daydreaming about the Advanced Diver Certification that I was here to earn. I glanced to my right and saw camouflaged in the rocks the oddest green and yellow sea turtle imaginable. It was about the size of my torso, slimy and absolutely gorgeous -- nonchalantly hanging out like it owned the ocean floor, which upon further consideration, it more or less did.

I felt privileged to swim with such a creature, but also heartbroken to discover I had no one to share the experience with. One of the other amateur divers had made it his life mission to spot a turtle, so I was determined to point it out to him. Regretfully, jumping and waving your arms frantically while underwater is a slow and painful process -- to such an extent that virtually all of the drama and excitement is drained from the experience.

The only useful way to communicate in the deep is to use the set of previously established hand signals -- like a flattened palm on the head for "shark," or a pinching motion for "eel." Moreover, the single method for grabbing the attention of people who aren't already looking directly at you is to annoy them to death by relentlessly banging something metal against your tank.

Frustratingly, the latter was not an option for me today. As I had nothing metal on my person, the attention-getting privilege was more or less reserved for the dive masters, leaving me with no practical way of motioning to the group.

What seemed like an eternity later, the instructor finally looked in my direction, signaling that I should approach him to view a spotted eagle ray. This was absurd, considering that we had already seen roughly one million rays and approximately zero sea turtles. I tried my best to remember the signal for "turtle," but try as I might my mind kept drawing blanks. Plan B was to improvise a sign for "I don't want to come see another stupid ray; I want you to come over here and see this!" Believe it or not, this message proved to be even more difficult to convey.

After about a minute of fervent, slow motion waving and pointing combined with an almost childish refusal to budge from my post, the others finally began to swim in my direction. The turtle became spooked and swam away as the large men flitted closer, and its flight was breathtaking. I have never seen something dance and float so gracefully -- neither in air nor water. I chased after it for a few minutes, before letting it disappear into the foggy distance.

When we reached the surface, the dive master informed us that what we had seen was a critically endangered hawksbill sea turtle, which is known for its beak-like mouth and serrated carapace. While one of the smallest of all species of marine turtles, it is also one of the most aggressive -- and, if provoked, certainly not afraid to defend itself with its strong mandible.

According to the Humane Society, this reptile's worldwide population has declined 80% in the last century, and we were lucky to spot it. Sadly, illegal poaching is the creature's most imminent threat -- both the eggs for consumption and adults for their beautiful shells and skins. They dwell in shallow waters less than 60 feet deep, making them easy targets for hunters.

We spent the rest of the adventure elated, exploring the nooks and crannies of the Argentina dive site. Before I knew it, our hour-long dive was up. Amelie and Pierre, two of Summer Salt Dive Center's employees working on an internship from France, had brought along homemade brownies and pineapple to help us re-energize.

Our group munched and chatted for the 20 minute jaunt back to shore, having been bought closer by the incredible life we had just witnessed under the sea. We passed around the camera, reliving the dives while they were still fresh in our memories.

Later that evening, my friend Barbara came all the way from Liberia to celebrate my birthday at Hotel Coco Palms. We sat by the pool and talked over drinks and sushi rolls, the night's favorites being being the Philadelphia and the Alaska. For desert, Coco Palms Restaurant's thoughtful chef sang and brought out a slice of Costa Rican flan with a candle in the middle.

Exhausted, I only had to walk up a short flight of stairs to my suite, where I cranked up the air conditioning and collapsed onto the king sized bed. I didn't budge an inch until morning.